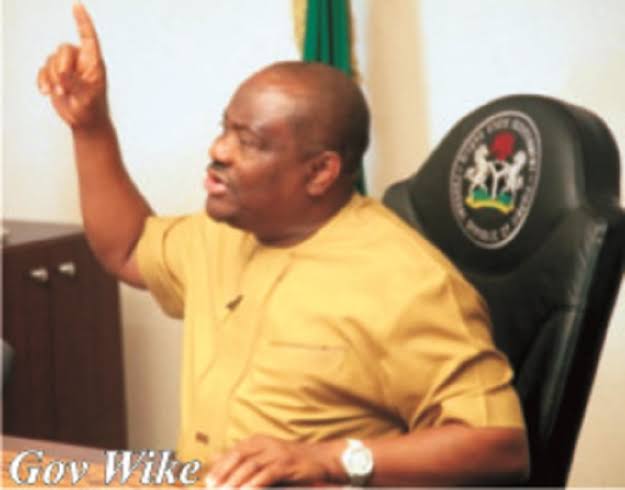 For some reasons, Nyesom Wike has managed to become one of the trending talking points in Nigerian politics since June. From 2015 to date, many political leaders especially within the Peoples Democratic Party have decided to remain calm as Wike’s arrogance keeps graduating from one empty stage to another. As the PDP is battling with its not-too-familiar role of a new opposition party, many have been reluctant in openly cautioning Wike’s antics to prevent any unnecessary explosion.

This is why we are where we are today.

Governor Nyesom Wike thinks he has the monopoly of intimidation, believing that there is no line he cannot cross. He feels he has come of age to the extent that he can rudely utter anything against PDP elders like Sule Lamido.

As one of the only 3 surviving founding fathers, Lamido has a duty to say the truth, no matter whose ox is gored. For Wike’s information if he doesn’t know, Sule Lamido and Late Abubakar Rimi were detained by Late Abacha in the course of fighting for democracy and they were only released after his death. We can’t fold our arms in the midst of Wike’s irresponsible behaviour towards him just because we want PDP to win elections.

The issue is simple as Lamido pointed out, there was a convention in which even Wike who lost accepted to be credible. What then is the noise for? Is Wike the first person to lose a presidential primary?

Ordinarily, there shouldn’t be any reason to interfere in Wike’s show of arrogance if he had not been disrespectful to PDP leaders. Categorically, who or what has offended Wike? Is it his Southern co-contestants whom he couldn’t convince to work together with him? Is it Atiku Abubakar who settled for competence and exercised his constitutional right by picking a running mate he can be comfortable working with? What exactly is the issue here?

To begin with, Wike is as empty as his intimidations. He doesn’t have any track record for excellence. As a Federal Cabinet member between 2011to 2015, Wike didn’t distinguish himself for anything good except for using his position to unleash the violence that brought him to office as governor in Rivers State. While President Jonathan’s cabinet was known for having the best brains then, Wike didn’t demonstrate any capacity to deliver in his four years as minister because he lacked any.

Wike’s assertion that Sule Lamido is promoting his family for political positions is the height of ignorance. For the over 45 years in which he has been in politics, he had supported and promoted the career of hundreds of people whom he never shared any family relationship with. Between 2007 to 2015, he could’ve easily opted to nominate his son or any of his family members into any position, but he instead decided to pick others. If he had done otherwise, nothing would’ve happened.

Over the years, Lamido has promoted and helped many people who later turned out to fight him and the political party he had laboured to build. Should he continue to be promoting people who are enemies of the PDP? In the last 24 years, Sule Lamido together with others laboured to build and nurture the PDP for which Wike has enjoyed and still enjoying today. It is PDP that gave Wike everything he is boasting of today. Even the River State resources that he is squandering today in travelling and holding meetings abroad are all thanks to the office of the PDP government he’s occupying.

For the avoidance of doubt, Sule Lamido did not sponsor or promote the candidacy of Mustapha who happens be his son. Mustapha contested like any other candidate, subjected himself to the rigours of the process and won the primary elections which was witnessed by everyone and certified by INEC and PDP National officials. He won on his own merit and he is qualified with his PhD degree to occupy any office in Nigeria. If Lamido wanted to impose any family member, he could’ve done so in 2015 or 2019 when he had absolute control. Can Wike honestly claim to have emerged freely and fairly in 2015? Can he say with all honesty that his current governorship candidate emerged transparently? What moral right does he have to question other people’s choices?

Wike’s arrogance is riding on the illusion of owning Rivers State and the privilege of controlling its resources. This is why he apparently believes he can be rude to everybody as if he is the only state governor in Nigeria. Rivers State people are not Wike’s slaves or servants, they are independent and wise enough to vote the right candidates in any elections. If he thinks he can lay claim to the ownership of their freedom to exercise their rights, they will surely prove him wrong in 2023. Before Wike, PDP has been winning elections since its inception,certainly he cannot claim to have installed Dr Perter Odili or Rotimi Amaechi as governors.

There is no problem whatsoever with Wike wanting to become president. But if he thinks he can bulldoze and intimidate his way like he did on his way to the Rivers Government House in 2015 and get away with it, he is mistaken. The office of the President of the Federal Republic of Nigeria comes with a lot of responsibility which are too sophisticated for an arrogant rascal. The maturity needed for leadership is beyond a bottle of whisky. Wike lacks the temperament to occupy such an exalted office of the President.

We call on Nyesom Wike to embrace humility and concentrate on the victory of the PDP. We understand his fears of political irrelevance beyond 2023 when he no longer has the luxury of power and unlimited government resources to unleash his intimidation against the public. The only way out for him is to be humble, respect his elders and leaders, accept that power is transient, work for the victory of the PDP and perhaps reserve some hope for himself in 2027.

Umar Danjani writes from Jigawa State and can be reached on: Hadejiaudanjani@yahoo.com

Read Also:  Igala Kingdom judgement: Why Bello, Sha'aba must be guided on historical facts
Related Topics:ArroganceLamidoRiversWoke
Up Next

In spite of Obasanjo’s remarks, there is a worthy candidate