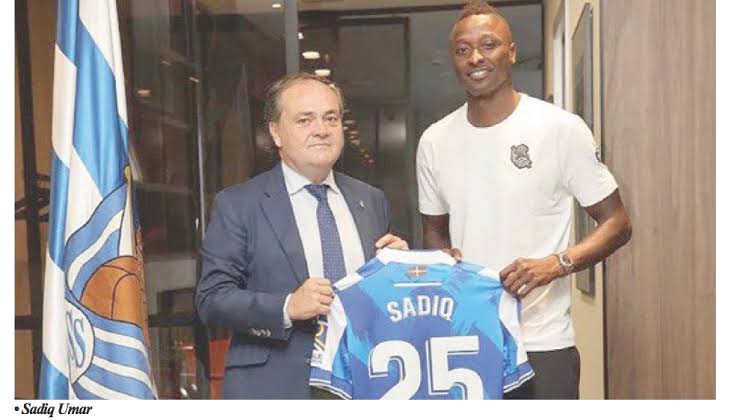 Umar, who yesterday bid farewell to Almeria, is poised to make Real Sociedad 23-man list ahead of the campaign match day 1 outing scheduled for Old Trafford.

It was however gathered that the lanky striker who was obtained for a whopping sum of N8. adsbygoogle || []).push({});

5 billion, signed for the Spanish side after passing through medical routine before being awarded the club’s jersey No 25.

Enroute to his signing, he was accompanied by his childhood friend and ex- AS Roma teammate, Nura Muhammad. The duo were spotted in a private jet alongside his agent.

Before now, the Kaduna born striker had been the subject of debate all summer, with several clubs interested in him following his performances for Almeria in the last two years.

Sadiq has scored 40 league goals in the last two years for Almeria, including two in the new La Liga season. His 18 goals last season helped La Union finish as the Spanish Segunda Champions.