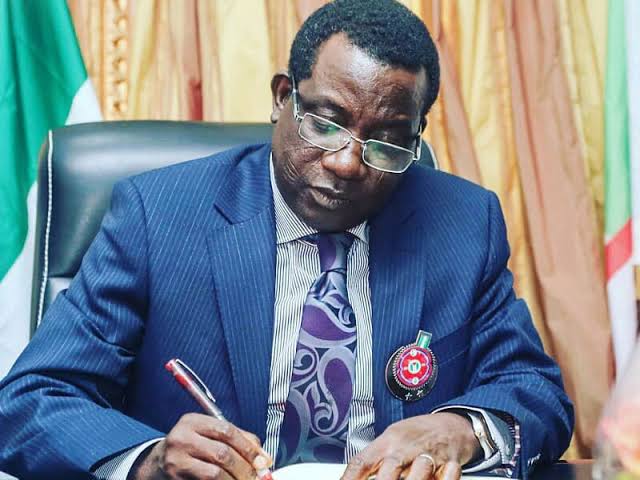 Following the recent appointment of the Plateau State Governor, Barr. Simon Lalong by the National Chairman of the All Progressives Congress, Sen. Abdullahi Adamu as the Director General of the Presidential Campaign council, the development has generated condemnation by various groups and individuals across Nigeria.

It would be recalled that Governor Simon Lalong, who doubles as the Chairman Of the Northern Governors Forum is the only Christian Governor in APC from the Northern states who should have been appointed as the presidential running mate to Sen.

Bola Ahmed Tinubu, but was outrightly denied, while Sen.

However, many Christian groups within and outside Plateau State including prominent Nigerians have kicked against the appointment of Governor Simon Lalong by the All Progressives Congress as the Director General of the Presidential campaign Council.

Plateau Group, known as Concerned Christians on the Plateau had asked Governor Lalong to reject the appointment as Tinubu/Shettima Campaign DG.

The group during a press conference in Jos, through its convener, Rev. Benard Kyenson, and Secretary, Pastor Julius Arabo advised Governor Simon Lalong, of Plateau State, to decline the offer to lead the APC presidential campaign council. They claimed that Plateau Christians will not support him in “this questionable engagement or assignment.

It said that the APC had rejected him as a vice presidential candidate due to inefficiency and had since turned around to force him to seek votes for the same party, which it claimed was utterly inappropriate.

To convince their Christian brothers who have been loyal and obedient to the All Progressives Congress (APC) to immediately resign from the party because it did not value or respect their religion, the group has thus joined its voice to that of other religious bodies, particularly the Christian Association of Nigeria (CAN).

The group expressed surprise that APC, which does not value Christians to garner votes in the position of a vice presidential candidate, would suddenly turn around and appoint Governor Simon Lalong of Plateau State, a Christian, as its campaign Director General. It claimed that this demonstrated that Christians are only effective at enticing people to vote, but not holding elective positions.

“In light of this, we are urging Rt Hon Simon Lalong to decline the offer because we, the Plateau Christians, won’t stand with him in this shady assignment or engagement. It is completely inappropriate for the APC to now turn around and make him campaign for the party, according to the statement. “The APC had previously rejected him for the position of the vice-presidential candidate due to incompetence.

Concerned Christians in the Plateau commented further on the APC’s choice to run a Muslim-Muslim ticket, saying that it demonstrated the party’s level of religious intolerance by ignoring Christians in the North.

Also speaking on the development
the President and General overseer of Evangelical Bible Outreach Ministries International (EBOMI) prophet Isa El -Buba described the appointment of Governor Lalong being the DG as an insult to the Christian community in the North.

He disclosed that going by his findings, the population of Christians in Northern Nigeria is over 50 million.

He stressed that Northern Nigeria is not only made up of states in the far north, but also includes Middle-Belt minority states such as Plateau, Nasarawa, Kogi, Benue, Niger and Kwara states respectfully.

He disapproved of the appointment of Governor Lalong as Director General of Tinubu Shatima’s presidential campaign Council.

Meanwhile, the Plateau State Governor Barr. Simon Lalong during a recent Plateau stakeholders meeting held at the New Government House, Jos used the opportunity to speak about his appointment as the Director General of the APC Presidential Campaign Council, assuring the people that his appointment is not a minus but a plus to Plateau State, especially within the ruling party.

He explained that contrary to some views that his appointment is about religion and an attempt to ridicule Christians and the North Central, some people who are critical on the his DG appointment never supported Christian aspirants, during the primaries and also sidelined the North Central and prospective nominees for the Vice President from the zone and Plateau State because of selfishness.

He assured the people that he will do his best in the assignment given to him as a loyal party member, but will always protect and safeguard the interest of the people of Plateau State wherever he finds himself.

Lalong had disclosed that campaigning for APC Presidential flag bearer, Senator Ahmed Tinubu and his running mate Sen. Kashim Shettima wouldn’t be a difficult task for him in Plateau and Nigeria.

The Director General also noted that his appointment to lead the Tinubu campaign trains has shown that the Labour of the People of Plateau State is not in vain.

“To the people of Plateau state, I would say that our labour is not in vain, to us in Plateau is not a difficult matter, when we were campaigning in 2015, some people say our party was a Muslim party and we won the election, but we won twice.”