I have just read, with angst and trepidation, a statement credited to the Hon. Attorney General of the Federation and Minister of Justice, Mr.

Abubakar Malami, SAN, to the effect that the NASS has no power to summon the President over his “operational use of the Armed Forces”.
Read Also:  Jonathan's former aide damns Buhar's speech, says northern muslims head all positions

I am more disturbed with the AGF’s stance because the President has already voluntarily agreed to appear before the NASS.

The President can never do so alone. So, Mr. President is subject to the scrutiny of the NASS as to why the strategies so far employed by Mr President to combat insecurity have abysmally failed Nigeria; and why he has continued to retain Service Chiefs, whose tenure of office has since expired, and who have since outlived their usefulness, efficiency and effectiveness.

There is nothing secret or confidential about the Nigeran security situation, as the AGF want us to believe. The AGF must be living in another utopian world, not the same world of reality, where the entire Governors of the North East, and the entire Northern establishment and elites, including the Sultan of Sokoto, the ACF and the NEF, who have all decried the terrible insecurity situation in the North.

Indeed, the Sultan said, without contradiction, that the North is the most hazardous and perilous place to live in Nigeria today. So, where is the AGF getting his information about reclaiming of over 14 Local Government Areas allegedly previously controlled by the Boko Haram from? Is there anybody in Nigeria today, including even the toddlers, who do not know that the entire security architecture and apparatchik of Nigeria is over 98% controlled and located in one section and one religion of this pluralistic, multi-ethic, multi-religious and multi-linguistic country called Nigeria? 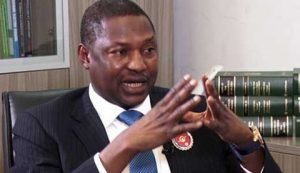 I therefore whole heartedly and most vehemently disagree with the said statement credited to the Hon AGF, to the effect that the National Assembly is not constitutionally competent to invite Mr. President to come and address it on national security issues.

That piece of advice is wrong, wrong and wrong. I am amazed that the Presidential aides and spoke persons to Mr. President, such as Minister of Information, Mr. Lai Mohammed, the AGF, Mr. Femi Adesina and Mr. Garuba Shehu, do not give Mr. President the right and correct advice as to how to move the nation forward. They constantly engage in sophistry, inanities and ineffective liberal disquision, which do not in any way help to re-engineer the national weal; what late K. O. Mbadiwe, will refer to as “national resurgimento”.

President Muhammadu Buhari must realise that history will judge him for good or for bad; not his Attorney General or spokepersons. What Nigerians will remember in the future will be “the Buhari Administration”, not the Abubakar Malami, Lai Mohammed, Femi Adesina, or Garuba Shehu administration. This is because, as former American President, Harry Truman, once put it, “the Buck stops here”.

The Nigerian presidential system of government is modeled after the American Presidential system of government. And since 1776, when America became independent from the British Empire, and up to April 30, 1789, when George Washington stood on the balcony of Federal Hall on Wall Street in New York, and took the oath of office as the President of the USA, every American President has always given an annual “State of the Union Address”. And this is actually prescribed in the American Constitution, in Article 2, section 3, clause 1. Although such a specific provision is not found in the Nigerian Constitution, it is however clear that under section 4 of the 1999 Constitution, it is the National Assembly that is vested with the constitutional powers to “make laws for the peace, order and good government of the Federation, or any part thereof with respect to any matter included in the Exclusive legislative list…..”.

It therefore means that the President can only execute laws made by the National Assembly, by virtue of section 5 of the same Constitution, either by himself directly, or through the Vice President, Ministers or Officers of the Public Service of the Federation.

Similarly, under section 81(1), the President is expected, every financial year, to prepare and physically lay before the National Assembly, estimates of the revenues and expenditure of the Federation for the next financial year. This is commonly called the National Budget.

In such a situation, the Red and Blue Chambers of the NASS, meet together at a joint sitting, which is presided over by the Senate President, and in his absence, the Speaker of the House of Representatives, under section 53(2) of the 1999 Constitution. Can anyone, including the AGF, rightly argue that the NASS cannot constitutionally, not only invite, but also command, the President to, appear before it? I think not.

Furthermore, by virtue of section 88(1) of the 1999 Constitution, the National Assembly has the powers, by resolution published in its journal, or in the Official Gazette of the Federation, to direct or cause to be directed, investigation into ANY MATTER that it has powers to make laws on, as such matters include the conduct of affairs of ANY PERSON, authority, ministry or government department, which is in charge of executing or administering Laws enacted by the NASS, and also disbursing or administering monies appropriated or to be appropriated by the Executive under sections 80, 81, 82, 83, 84, and 162 of the 1999 Constitution. And these powers of the NASS are exercisable to “correct any defects in existing laws”, and to “expose corruption, inefficiency or waste in the execution of laws made by the NASS”, and in the disbursement of funds appropriated by it. “ANY PERSON” stated in section 88(1)(b) above, of course includes President Muhammadu Buhari himself. No more, no less.

In the face of this, can the AGF still argue that Buhari cannot be summoned by the NASS to explain the following:

(a) The monumental corruption currently ravaging the country, which has since made recovered loots to be further relooted?

(b) Corruption which has made the once Anti-corruption Czar, Mr Ibrahim Magu, to himself face the Justice Salami Panel and CCB, over allegations of massive corruption, abuse of office, insubordination, etc, which was ignited and initiated by Abubakar Malami himself?

(c) That corruption in Nigeria has become so incrementally monumental and cancerous, strutting about like a proud peacock, that Nigeria has carried the unenviable trophy of the 148 out of 180 most corrupt countries in the world; and the shameful diadem of the 3rd most corrupt country in West Africa, according to the 2020 Transparency International Corruption Perception Index (CPI)?

(d) Why “inefficiency” (section 88(1)(b)) and ineffectiveness, have made the present Buhari government to become lame-duck, clueless, visionless and compassless, that the country is literally on auto-pilot?

(e) That insecurity has become so alarmingly rampant that Boko Haram that was so tamed under the Jonathan government that elections seamlessly took place in the North East in 2015, has today become so monstrous that Northerners themselves are now singing to Nigerians that Boko Haram literally controls the entire North East space, mounting road blocks and checkpoints, and collecting revenue, taxation, and ransom from indigenes, whom they issue pass to, before they are allowed to move freely about in their own territories?

(f) That Boko Haram has even been rendered a child’s play, when compared with rampaging armed banditry, vicious and murderous Herdsmen, who kill Nigeran citizens in their farms and rape their mothers, wives and daughters, in their bedrooms, right before their very eyes?

(g) That Boko Haram has since been overtaken by violent and savagery cases of kidnapping and murders across the length and breadth Nigerian space?

(h) That the Nigerian economy has become so parlous that under the Buhari regime, Nigeria has entered into a second recession, and has since become the poverty capital of the world, overtaking India; whereas, under the Jonathan government in 2015, Nigeria was rebased as the biggest economy in Africa, overtaking South Africa in the process, with over $500billion, which made her one of the 7th fastest growing economies in the world?

With these, the AGF should never advise Mr. President not to appear before the NASS. It is not only moral and ethical to do so; it is also legally and constitutionally mandatory for Buhari to honour NASS summons.

Politics: The crisis of 2023 in Ebonyi State