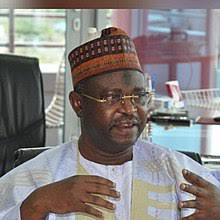 Former Speaker of Nigeria’s House of Representatives, Hon. Ghali Umar Na’Abbah has been summoned by the Department of State Services.

Na’Abbah’s invitation to appear before the secret Police on Monday, 17th August was not unconnected with the media interview he granted the Channels Television on Thursday.

In the statement by Tanko which was made available to journalists on Saturday, he said Na’abba was said to have, during the interview on Channels Television, revealed the agenda of the NCFront and called on Nigerians of good conscience to join the group.

The statement added Hon Na’Abbah would honour the DSS invitation and would be at the DSS Headquarters in Abuja on Monday, at noon.

It read: “Distinguished compatriots! Please be notified that the DSS, on Friday, sent an invitation to NCFront Co-Chair and former Speaker of (the House of Representatives) Nigeria, Rt Hon. Ghali Umar Na’aba, after his very profound interview on Channels Television on Thursday, in regard to the agenda of the NCFront to bring about a new Nigeria.

“However, our leader, Ghali Umar Na’aba has decided to honour the DSS invitation and, therefore, shall be visiting the DSS Headquarters in Abuja on Monday at 12noon.

Senate President rejoices with Babangida at 79