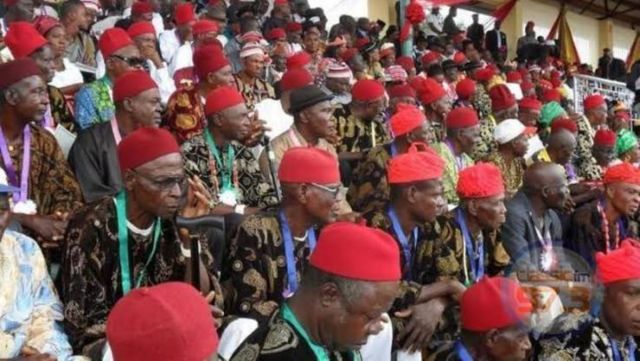 Senate Minority Leader, Senator Enyinnaya Abaribe has condemned in very strong terms the killings last Sunday of Igbo youths in Emene, Enugu State by the Security operatives saying the constancy of the killing has given room to wide suspicion of a sinister motive.

He also warned that the labelling of every Igbo group as terrorists and the incessant killings of her youths by the security operatives has become one too many and is no longer acceptable to our people.

In a statement in Abuja by his Media Adviser, Uchenna Awom, he joined other groups to demand for the setting up of a Judicial Panel of Inquiry by the Governor of Enugu State, Hon. Ifeanyi Ugwuanyi urgently.

The judicial panel Abaribe said, will help to unravel the truth in the assertions of both the security and other groups on what really happened.

Senator Abaribe in condemning the Killings, said it is disheartening that Security operatives seems to derive pleasure at any slight whim to unleash mayhem using the most lethal weapons against unarmed Igbo youths at every turn.

Such unsavory, brutal and hateful resort to extreme repression he added demean Nigeria’s democratic ethos and even questions her unity.

“We are in a democracy where every agency of government, particularly the security apparatchik must adhere strictly to rules of engagement with regards to dealings with the civil populace in such a manner that will be in conformity with international best practices.

“The last time I checked, Nigerians still enjoy freedom to associate freely. Nobody has told us that the Igbo youths meeting last Sunday was a gathering meant to launch attack on anybody. Who will they attack and for what? What Intel informed the police and DSS deployment to the venue of the meeting?

“Incontrovertible reports suggests very strongly that the killings were ignited when the security operatives stormed the venue of that peaceful meeting, not that the youths marched to anywhere to attack anybody. These are the issues that should be addressed at the panel” Abaribe said.

The Minority Leader further said it is even most worrisome that the people will no longer gather peacefully in their own country without being dispersed forcefully or be branded terrorists for no just cause.

The lawmaker said he would not want to believe that the wide card labeling of every Igbo youth group as terrorists is a cover to achieve a predetermined plot.

“Let it not be that we now have an army of occupation in Southeast, working clandestinely to create fears and state of anomie in a region that has remained perhaps the most peaceful in the country,” he said.

He however, advised the youths to remain calm and not to resort to any form of reprisals, or succumb to provocations that could tempt them to take laws into their own hands, while “we await the official reaction of the Enugu State governor on the matter”.