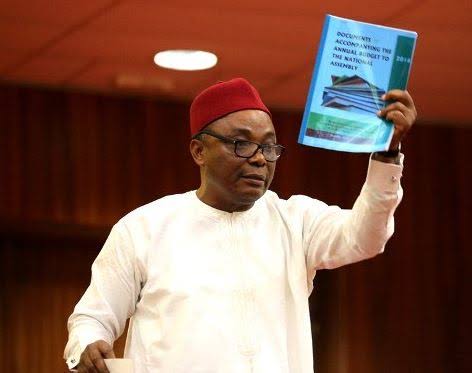 As controversy continue to trail the Niger Delta Development Commission (NDDC)’s financial fraud to the tune of N81.5 billion, Senate Committee Chairman on Niger Delta Affairs, Senator Peter Nwabaoshi has dared Godswill Akpabio to report him to the Economic and Financial Crimes Commission (EFCC) or other anti-graft agencies of his choice.

Nwabaoshi in a statement on Monday which was obtained by CAPITAL POST in Abuja reacted to the Minister of Niger Delta Affairs, Godswill Akpabio who mentioned his name among the beneficiaries of NDDC projects in National dailies.

The lawmaker said, Akpabio is a blackmailer, who is trying to divert public attention from the N81.5 billion himself and the Interim Management Committee (IMC) have perpetuated in three months of the agency.

The statement reads: “My attention has been drawn to a publication in the Punch Newspaper of Monday, 27th July, 2020, ostensibly quoting the Minister of Niger Delta Affairs, Senator Godswill Akpabio whilst responding to the ultimatum given by the Hon. Speaker of the House of Reps, Femi Gbajabiamila, to name the beneficiaries of his bogus claim during his appearance before the House Committee on NDDC
investigative hearing that 60% of NNDC jobs were awarded to National Assembly members.

“In the said publication, Mr Akpabio alleged that I was awarded contracts for 53 NDDC projects.

“I wish to state unequivocally that this allegation has no bearing with the truth and challenge Mr Akpabio to send so-called list to anti graft and other security agencies if he can substantiate the apparently baseless allegation. Indeed I would have made further comments but for the fact that the matter is currently before two competent courts of law.

“However, suffice it to say that this unsubstantiated allegation is in line with Mr Akpabio’s well known agenda to continuously blackmail me so as to keep diverting public attention away from the senuous mismanagement of the NDDC by the Interim Management Committee (IMC) under his supervision and under the guise of a phantom forensic audit that has no operating time line.

“My advise to Mr Akpabio and the IMC is to focus their energy on explaining to Nigerians how they spent a whopping N81.5b within a pen’od of five months which includes the following questionable expenditures:

(1) Refreshment/logistic for project verification paid to IMC and staff in the sum of N58.5m

(3) Reckless expenses paid to IMC and staff to commission only one road, Ogbia Nembe road for N50.5m, an amount that is enough to construct a fresh 1km road

(4) Conflict resolution in Delta state in the sum of N148m, when there was no conflict known to me or my other colleagues in the National Assembly representing Delta State that was resolved by NDDC

(6) Expenses incurred by IMC during courtesy visit to River State Governor in the sum of N41 .9m

(7) Expenses incurred by IMC and staff in not-too-young-to-run programme for N46.6m

(10) Welfare package to Niger Delta youths for N270m paid to IMC and staff. The youths have denied receiving such welfare payments.

(11) Payment to Clear Point Consultancy on rebuttal of media attack against the Honorable Minister of NDA, Godswill Akpabio in the sum of N39.4m This is an incredible and unbelievable expenditure that is currently fueling the media blitz and misinformation by Mr Akpabio and the IMC using Nigerian’s tax payers funds.

The above revelations are just a tip of the mind boggling and reckless payments running into billions of naira paid by the [MC members to themselves and expended with the approval of Mr Akpabio on mundane and useless projects that have no developmental impact on the life and livelihood of the Niger Delta people as envisioned by the founding fathers of the NDDC.

Mr Akpabio and his IMC should apologise to the Niger Delta people in particular and Nigerians in general for this grand wastage arising from their crass incompetence. As a realist, I am confident that a day will come when Mr. Akpabio and his IMC will have a date with the law.

I will in the meantime express my unwavering commitment to improving the lots of our people in the Niger Delta, supporting quality legislation in the National Assembly and working for a society every Nigerian can be proud of. This is my mission in politics and I would not be distracted by the antics of political mud slingers and their agents.