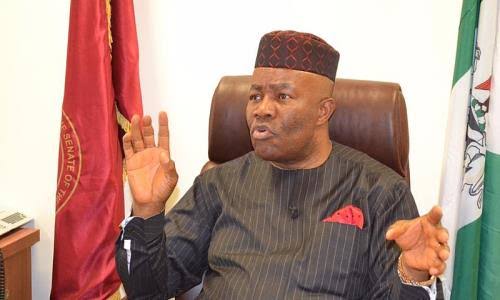 A group, Emerging Leaders Forum of Nigeria (ELFON) on Sunday has called on the Minister of Niger Delta Affairs, Godswill Akpabio to resign or be ready to face suspension over damning fraud allegation in the Niger Delta Development Commission (NDDC).

They said the Minister’s resignation would pave way for completion of probe of the Commission which they noted, has become necessary in view of revelations trailing the preliminary outcome of the exercise.

ELFON also berated those mounting pressure against the House of Representatives Committee for probing activities of the Interim Management Committee (IMC) of the NDDC, saying, they are true enemies of democracy.

At a press conference in Abuja, ELFON expressed surprise at naivety of certain persons and group for criticising the lower chamber for doing what they have been constitutionally empowered to do, noting that those opposing the lawmakers have skeletons in their cupboard. push({});

They counselled lawmakers not to be deterred as Nigerians are fully supporting the probe of the NDDC in order to reposition the agency for its core mandate when it was established about 20 years ago.

National President of the group, Hon. Godstime Chukwubuikem Samuel said the group closely monitored the proceeding of the investigative hearing and discovered that the NDDC’s own report revealed mind boggling funds expended on COVID-19, wondering how one would reconcile such anomaly at the time that the Niger Delta region is in shambles.

“That the Constitutional action embarked on behalf of Nigerians, by members of the National Assembly, to probe the NDDC over the Commission’s alleged financial misappropriation of our collective wealth is a welcome development. Any one against it has a “skeleton in his or her cupboard” and wants to divert public attention.

“We condemn every action that tend to intimidate Members of the House Committee and the witness as invited to give evidence before it, having the case of Joy Nunieh been a very good example.

“How do Niger Deltans and Nigeria reconcile the report that NDDC MD Prof Podei was proud to say they used ₦10 billion to take care of themselves as palliatives.

“We are shocked at the nauseating courage of spending huge public funds without budget and approval and had the effrontery to tell Nigerians that they spent it to take care of themselves.

“The scholarship funds traced to the account of one of the Executive Directors should be returned immediately. When did he become CBN? More painful is the fact that he also collected estacode for a journey never made.

“Worried that a whooping sum of ₦86M was collected in pretence of attending seminars during COVID period when there were no flight operations. One wonders if he is a witch and if he did travel in the realm of the Spirit during this period. Nigerians are not fools.

“If Senator Godswill Akpabio and his instituted Interim Management Committee of Niger Delta Development Commission (NDDC) are confident that their hands are clean, they should make themselves available to the National Assembly probe panel rather than grandstanding and sponsoring youth groups for cheap propaganda and protest as confirmed by intelligence available to us.

The group called on the Minister of Niger Delta and former governor of Akwa Ibom State, Godswill Akpabio to resign his position to enable completion of the probe of NDDC.

“We call on the Minister of Niger Delta Affairs to honourably step aside, otherwise, we call on the President to apply the Public Service rule and suspend Senator Godswill Akpabio to give room for unhindered investigation by the National Assembly as is in the case of Magu.