Magu who was deepnecked in corruption was suspended on Tuesday by the Justice Ayo Salami led Presidential panel after he was interrogated for two days.

The ex-lawmaker, who spent over a month in the Economic and Financial Crimes Commission facilities over alleged bribery scandal, revealed names of operatives as “Magu boys”, or “the Chairman squad”, adding that they are officers who operate with impunity.

Speaking from his experience, Sani explained that they are the group of cruel officers who report directly to Ibrahim Magu.

In a post on his Facebook wall, he wrote: “They are a select cream of vicious and cruel officers who operates exclusively and with impunity and only report directly to their boss.

“The inside cult is the dark and immoral aspect the agency engaged in persecution, blackmail, frame ups and cruelty.

“The cult has been the wheel behind their embattled boss. ” 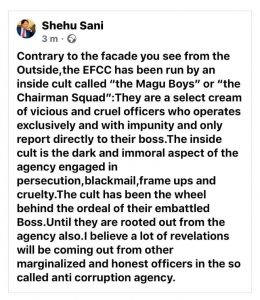 The ex-lawmaker insisted that the Federal Government must intervene and root out those gangs out of EFCC and overhaul activities of the agency in order to carry out their mandates.

He added that honest operatives in the EFCC will speak out on issues that were hidden in the agency soon.

Magu’s ‘men’ searches his home for hours, went away with vital documents