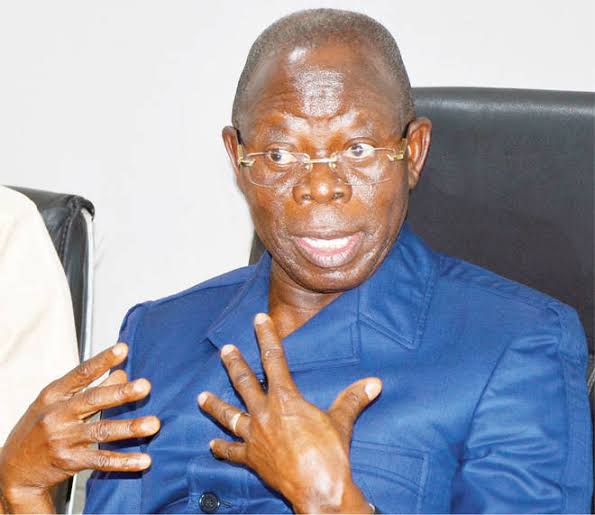 Ahead of gubernatorial election in Edo State, Comrade Adams Oshiomhole has been told that godfatherism in Edo politics was long dead, hence, he can’t be a godfather to Pastor Osagie Ize-Iyamu.

Rivers State Governor, Nyesom Wike, his Sokoto State counterpart, Aminu Tambuwal and the Chairman of the Peoples Democratic Party, Prince Uche Secondus, handed the warning to Oshiomhole, saying that governor Godwin Obaseki would be re-elected in the election.

The governors and PDP Chairman stated this at the inauguration of Obaseki’s re-election campaign held at the Samuel Ogbemudia Stadium, Benin City, Edo State on Saturday.

Nyesom Wike declared that South South belongs to the Peoples Democratic Party, while he said, nobody would be allowed to rig the governorship election.

Rivers State governor who is the Chairman, PDP National Campaign Council for Edo State Governorship Election, insisted that the ruling All Progressivess Congress would not have a foothold in the Southsouth.

He called on Edo people to reject APC to stop Oshiomhole from playing assuming godfather in Edo State.

According to him, the former National.Chairman of APC, Adams Oshiomhole has turned around to lick his vomit and he should be rejected at all cost.

“Today, we are here to tell the people of Edo State that they should not be afraid because nobody can rig the forthcoming election.

“Four years ago, Adams Oshiomhole said he cannot trust the APC governorship candidate that he was rusticated from school.

“Today, Oshiomhole is coming back to present the same person to Edo people. He thinks Edo people are fools. I challenge Edo people not to vote any person presented to them by Oshiomhole.”

Wike added that he will be in Benin on the day of election to ensure that Godwin Obaseki wins, while commending him for his performance in the last four years of his administration in Edo State.

“Governor Obaseki has done well in the last four years. You should not allow anybody to deceive you again.”

Tambuwal told Obaseki to believe in God and Edo people to defeat APC, saying that Obaseki’s case was similar to his own, but trusted God and defeated the APC.

Tambuwal tasked the Chairman of Independent National Electoral Commission (INEC), Prof. Mahmood Yakubu to ensure free and fair election so as to build on legacies of his predecessor, Prof. Attahiru Jega.

Presenting the PDP flag to Obaseki as the party’s candidate, Secondus described the governor as a gentleman and performer.

Secondus, who noted that the party was proud of the performances of governors on its platform, said godfatherism would not be allowed in the state.

Reacting, Obaseki pledged to do more, if elected, adding that Edo people deserve good governance in order to improve their welfare.