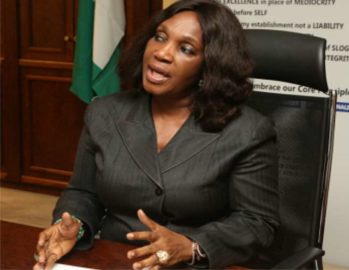 The former Acting Managing Director and Chief Executive Officer of the immediate past Interim Management Committee (IMC) of the Niger Delta Development Commission (NDDC), Barrister Joy Nunieh has broken silence on the circumstances that led to her abrupt quit as NDDC boss.

Speaking on Friday at the venue of the Senate Ad-hoc Committee on financial recklessness in the Niger Delta Development Commission, Mrs Nunieh disclosed that the Minister of Niger Delta Affairs, Godswill Akpabio wanted to administer oath of loyalty on her, but she resisted.

She said, if she had agreed, she would been used to siphon the NDDC funds without being able to resist as a result of the oath placed on her.

The former NDDC boss explained that Akpabio pressured her three times to placed her under oath to the extent that they took the matter to the Villa, but refused.

She feared that she would go to five years imprisonment if under Godswill Akpabio’s oath she commits infraction on the Public Procurement Act and wasn’t able to speak out, while he will be going about a free man.

She said: “He told me to take an oath. Though he denied that, he told me, three times until we had a reconciliation at the Villa in the office of Mr Abba who is the S.A. to the President on domestics.

After that, he said, he was going to remove me and he started the campaign of calumny against me. I didn’t even answer him because the fact will speak for itself.

On the procurement process, I refuse to go with him to the FEC meeting to deceive Mr. President and the reason is because the law says if I contravene a section of the procurement Act, it’s five years imprisonment without an option of fine.

“So if I had gone with him to deceive Mr. President I would have been in trouble because they said it’s 2020 budget, but Akpabio went and got approval when the budget was not ready.

Nunieh further explained her position on the controversial contracts in the NDDC denying that she never make payment without Akpabio knowing for anything.

“One of the issues raised against me was that I awarded contracts without them knowing about it. Am sure that is what they told you people yesterday.

“Apparently, Dr. Cairo Ojougboh never sit in the office, so he never know the workings and the bureaucracy of payments in the office.

“One, I am just a viewer of a platform that made payments in NDDC. There are different steps to take before payments are made in NDDC. One there is the issue of lassa fever which obviously they didn’t carry that one along.

“Nobody make payments in NDDC without Godswill Akpabio’s consent. When we first came to NDDC on the day of inauguration we were going to the camp, he told me Madam MD, if you don’t do what I said, the same pen I used in signing your letter; that is the same pen I will use in removing you.

Narrating further she said: “He said the first thing I should do, when I get to Port Harcourt, is to change dollars in NDDC account into Naira. I told him, I am scared to do that. He claimed that I have poverty mentality that I was afraid of money. All of you knew he accused me on that, saying I am afraid to spend money.

“After two days, he came to Port Harcourt and told that what I should do is to change dollars and I said I cannot just do that. He said I remove Mr. Katulgo from legal a d send me on compulsory retirement and he said we cannot have a northerner as head of the legal unit.

“I said, I cannot do that. I do not have the powers because I am just an IMC. It’s a criminal offence, and against public service rules for me to do that. He said I should repost all other directors that refused to take his instruction during my predecessor’s time, that is the person who was there before I came.

According to her, Akpabio wanted Senator Peter Nwaoboshi who is the Chairman of Senate Committee on NDDC and that of his House counterpart, Hon. Olubunmi Tunji-Ojo implicated for their resistance to the idea of Interim Management Committee at that time.

“So, he came and ask me to draft a letter on my letterhead implicating Senator Peter Nwaoboshi for collecting contracts in NDDC. I told him that I will not do that I am a lawyer and who alledges should prove. He said Senator Nwaoboshi is giving us trouble and beside, he didn’t recognize the IMC. I said I will not do that letter. He said I was ungrateful and I refuse to do that letter.

“Dr. Cairo now said he will do the letter. He said if Akpabio asked him to kill, he will kill before he ask why did he kill and I said, for me, I will not do that. At that place, there was one Mr. Etiebet who was the only NDDC staff that was present at that meeting. He now asked Dr. Cairo to go and sent for letter headed from the office. They now went and send for the letter headed. Dr, Cairo now did a letter which I want to tender at the Ad-hoc Committee before I came late alleging that Senator Nwaoboshi had contracts and I said if I signed, any document from me seen by Mr. President, he will believe. So I will only write that EDP who should know about it.

“The next thing he told me is that I should make sure these people, leaves the procurement because apparently Akpabio before I came when himself and Festus Keyamo became Ministers, in their first meeting, they awarded 30 contracts of water hyacinths.

“Mr. Linus who was Director Finance refused to sign because it didn’t follow due process. He also said, I should implicate the Chairman, House Committee on NDDC because the Chairman of House Committee has gone to Ondo State to hold a meeting to plan against him. I said, I don’t know that one, I have never seen him. But for Senator Nwaoboshi, he was my classmate at the Law school and we were called to bar the same day, however, I didn’t see him since we were called to bar, I didn’t really remember him and that was about thirty years ago.

“The NDDC before I came has overstretched for about 50 billion for hyacinths and so the National Assembly has written us that we should not pay for anything like that. Guess what, Akpabio never signed any documents. He will always refuse to sign, but tell you to go and commit fraud.

“For instance, he told me to go and raise a memo for an emergency contract for flood victims. You people remember that there was flood which we went to Channels AIT and all that.”

The investigation has been concluded with expectation that the report would be submitted to the Senate in two weeks time.