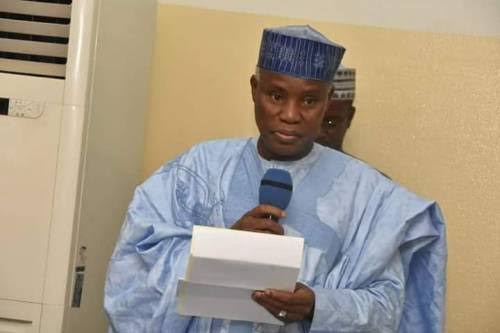 Private Umar who was conferred with the prestigious Chief of Army Staff award by the Minister of Defence for gallantly put his life on the line to save the lives of the endangered occupants of a bus that gutted fire.

In a statement issued and signed by the Special Adviser on Media and Publicity, Muhammad Abdulkadri in which was made available to CAPITAL POST in Abuja, the Minister explained the rare courage in the rescue of the people helplessly trapped in a thick inferno.

This was at the occasion of the 2020 Nigerian Army day of Honour and the Launch of a Compedium of Army Transformation titled; ”The Buratai years, 2015 -2020′” held at the NA Special Super Camp under the hegemon of the NA 8 Div, where the Land Force also heralded the birth of the Exercise Sahel Sanity performed by General Magashi. adsbygoogle || []).push({});

The objective of the Ops as earlier captured and contextualised in the speech of the Chief of Army staff, Lt Gen Tukur Yusuf Buratai is to decisively clean up the General Area of Operation of the unbecoming activities of the banditry which the Minister expressed optimism that it is achievable going by the sufficient supply of strong political will by President Muhammadu Buhari to the Military and the Para-Military prosecuting the Campaigns

“It was therefore a rare display of magnanimity by General Magashi who dolled out Five Hundred Thousand Naira (500.000.00) cash award to Private Umar whom he described as a patriotic and selfless nigerian who should be emulated by others.

This very rare display of kind gesture by the Special Guest of Honour at the milestone Ceremony which Climaxed the year 2020 Nigerian Army Day Celebration (NADCEL) also coincided with the One hundred and Seventy Five Years Anniversary of the Force which turned out to be a platform to remind the troops of the compassionate and human- face posture of President Buhari to fulfil all obligations to the troops wellbeing at all times.

It was also a bold demonstration of the Federal Government’s commitment, acknowledgement and encouragement of troop’s valour in battles and a forum for the retired infantry General to drop a wake- up charge message to the troops to remain committed to the National Aspirations to end insurgency and banditry in the country.

General Magashi who hit the grand running in high spirit immediately after alighting from the NAF Helicopter at the Helopad Wing of the Camp inspected the ceremonial guards parade and the general salute as well as received lperational briefs and carried out the official Launch of the Compedium, commended the Chief of Army Staff Lt Gen Yusuf Tukur Buratai for what he described as his uncommon achievements and exemplary leadership of the service.

Presentation of Soveniers climaxed the Defence Minister’s tour of duty to the General Area.

Related Topics:ArmyDefenceSalihi Magashi
Up Next