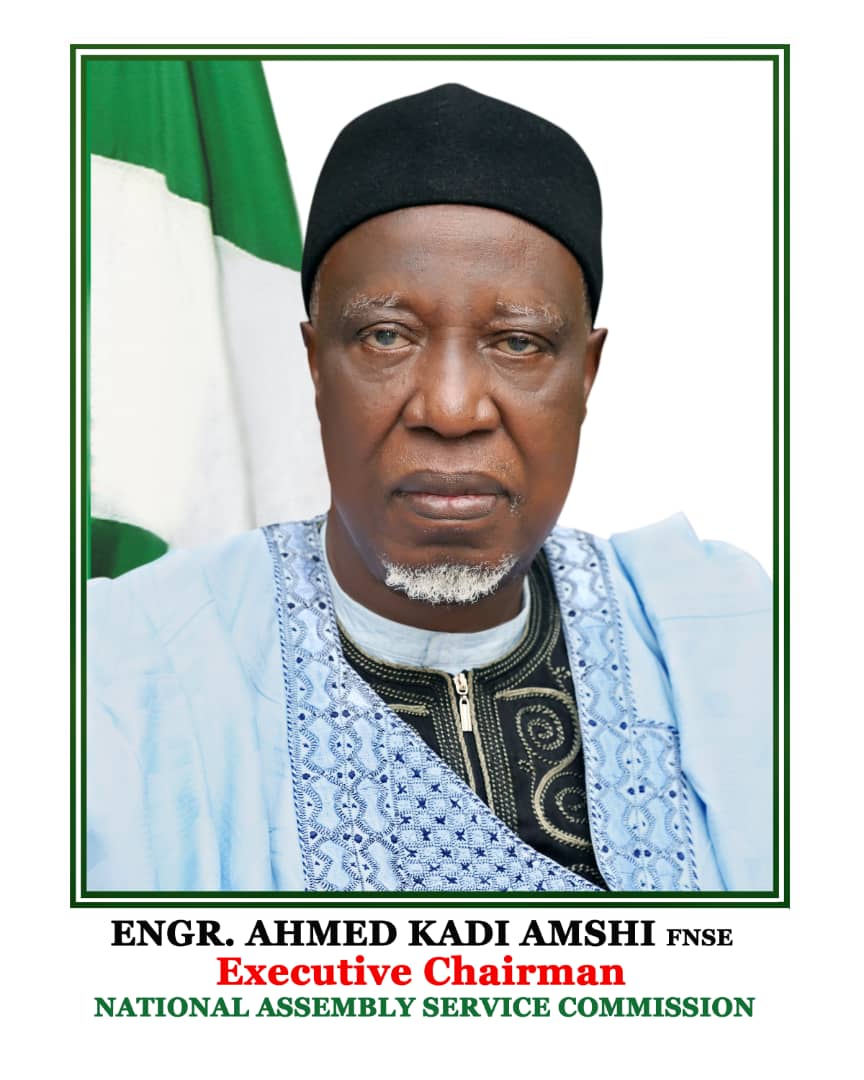 The inauguration of the new National Assembly Service Commission (NASC) team, led by a renowned Engineer, technocrat and political astute, Engineer Ahmed Amshi Kadi can best be described as a round peg in a round hole, which is capable of triggering administrative transfromation of the top management level of the National Assembly.

No doubt, the National Assembly leadership made a right choice by carefully and frugally carrying out selection of the Chairman of the Commission, which include other members that will serve as Commissioners from various geo-political zones comprising the 36 states of the Federation.

Amshi Kadi’s is versatility in both public and private service will be the hub of positive developement in the National Assembly Service Commission, having served for more than a decade at the management cadre of the red chamber, that had ushered in positive actions at the Legislative arm of government. push({});

A high level mien, calm and calculated, Amshi who came on board the National Assembly Commission with huge wealth of experience will within the shortest possible time, redress and introduce new policies and programmes that will shape and reshape the activities of the Commission,so as to deliver expected results.

A bureaucrat, combined with technocrat ideas and ideals, Engineer Ahmed Amchi Kadi is already used to the workings and protocols of the National Assembly, having handled a very key and sensitive positions to the admiration of both the immediate and by extension staffers of the National Assembly, who have worked closely with him in the course of official engagment and assignment.

The new Chairman of the National Assembly Service Commission was part of the success story of the 7th, 8th and the current 9th leadership of the Assembly, having played a prominent roles that stabilized and ensured smooth working relationship between the Executive and the Legislature.

As an insider for more than a decade, it is expected that Engineer Amshi will carry out a people oriented intiative, that is capable of driving the workforce of many decades, as Legislative workers regulator, interms of leadership, and decisions.

The confidence reposed in the the new Commission by the leadership of the National Assembly and by extension during its inauguration by President Muhammadu Buhari was a testament of result oriented team led by Engineer Abubakar Amshi Kadi.

His inauguration had also led workers and staffers of the Commission that span to the National Assembly, relive their instincts towards optimum perfomance both in and out of office, because of the new Chairman’s strong belief in reward for hardwork and dedication to duty.

The unrepentant belief in human capital developement, through trainings and re-trainings of staffers of the Commission to guarantee optimum perfomanceAhm devoid of any excuses, will be the focus of the new helmsman. .

His steadfastness, discipline, firm and incorruptible tendencies will assist him and the new Commission in no small measure, in his quest to sustain laudable policies and intitiate new areas, geared towards the progress of the Commission.

It is the wish of many Nigerians, that the journey of five years which has began by the new Chairman and members of the Commission would no doubt, bring a lasting legacy on the age long Commission towards positive developement.