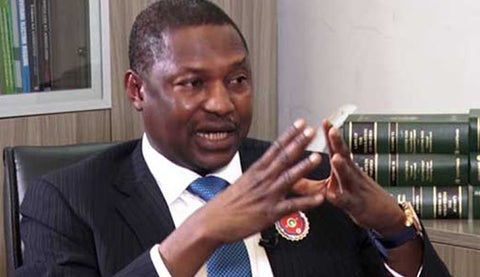 But the pan-Yoruba social cultural group, Afenifere; lawyers and activists on Monday lampooned the Attorney General of the Federation, Mr Abubakar Malami (SAN), for dropping the names of 10 soldiers named as accomplices in the kidnapping charges involving an alleged Taraba State kidnapping kingpin, Bala Hamisu, also known as Wadume, and others.

They demanded an explanation from the AGF.

The amendment to the charges announced at the Federal High Court in Abuja by the prosecuting counsel, Mr Shuaibu Labaran, on Monday, came days after the AGF took over the case from the Inspector-General of Police, Mr Mohammed Adamu, on June 3, 2020.

Labaran cited the “bureaucracy” involved in bringing the soldiers to court and the need to allow the case to begin as the reason for the amendment on Monday.

Names of a policeman, ASP Aondona Iorbee, and one Ahmad Suleiman (aka Dan Ball), were also struck off the charge.

The defence lawyers for the remaining defendants did not oppose the amendment on Monday.

Following the approval of the amendment by Justice Binta Nyako, the amended 13 counts were read to the remaining seven defendants who pleaded not guilty to all the charges.

Reacting to the removal of the names of the soldiers’ names from the charges, spokesperson for Afenifere, Yinka Odumakin, noted that the development appeared to be a proof of a comment by a former Minister of Defence, Lt. Gen. Theophilus Danjuma (retd.), that there was collusion between criminals and security agents.

He said, “When Gen. T.Y. Danjuma said there was collusion between criminals and security agents, this is clear evidence he knew what he was saying.

“It is a tragedy for any polity where the people don’t know whom to run faster from between criminals and security agents. This must be a serious challenge for the top brass.”

Also, reacting to the removal of the soldiers’ names from the charge sheet, a Senior Advocate of Nigeria, Mr Ebun-Olu Adegboruwa, said except there was plan by the military to try them separately before a court martial, there was no justification for the removal of their names.

The SAN, however, said government should be given benefit of the doubt, as there might be a move to court-martial the soldiers.

Adegboruwa said, “Under the Armed Forces Act, the soldiers will probably go through the court martial, because the military have their own system of prosecution.

“So, it may be early to speculate as to the motive for the removal of the soldiers’ names; because if they are already penciled to appear before the court martial, they cannot be in the Federal High Court at the same time.

“It will be good to find out whether there is a move to prosecute them in the court martial, which will excuse the removal of their names from the charge sheet before the Federal High Court.

“But if they are not being prosecuted in the court martial, then there will be no justification for the removal of their names.”

A Lagos-based lawyer, Mr Jiti Ogunye, while sharing Adegboruwa’s view that there might be plan by the military to court-martial the soldiers, said it was important for the AGF to handle the case transparently and carry Nigerians along, rather than create room for speculation.

Ogunye said, “Ordinarily it ought not to be suspicious because those soldiers who were charged initially with the policemen and Wadume, except they have been dismissed, are still subject to service discipline, that is, the court martial jurisdiction; so, they can be tried separately by the court martial because they allegedly committed the offence while serving as military personnel.

“However, one would have thought that given the length of time it took for this arraignment to take place, the AGF, the police and the military would have put their house in order so that the issue does not continue to raise unnecessary eyebrow or generate a needless controversy.

“They ought to have come to a decision on the forum for trying all the accused persons; whether the soldiers would be tried separately by a court martial or tried together with others in the civil court, in which case, the military should have dismissed the soldiers.

“What needs to be done is that the AGF, given the sensitivity and importance of this case, has to handle it in a transparent manner. If names are being removed, it shouldn’t be left to speculation. The reason they are being removed should be furnished to Nigerians. So, transparency and honesty of purpose are required to ensure that things are done properly.”

A former President of the Committee for Defence of Human Rights, Mr Malachy Ugwummadu, noted that the AGF office, created under Section 150 of the Nigerian Constitution, could, in exercise of its powers under Section 174 of the Constitution “initiate, takeover or withdraw any criminal matter instituted in a court of law except matters in court martials.”

But Ugwummadu said the AGF must be aware that “the world is deeply interested in what happens to this particular matter that shook the world and more particularly the Nigerian security community.”

He said, “Recall that the Nigerian Police and the country lost some of their best crack top cops in those avoidable circumstances that underpinned compromise and corruption. The Nigerian state, the security community, the Nigeria Police Force, in particular, the numerous victims of Wadume’s atrocious acts and the families of the fallen but gallant officers, including their leader will all be motivated to do more for this country or depressed and discouraged to make further sacrifices for this country depending on what happens with this case.

“Thus, as you exercise your full discretionary powers, Mr AGF, remember that the locus of justice and the interest of the Nigerian people in this matter are known.”

The Executive Secretary of YIAGA Africa, Samson Itodo, said the AGF owed the public an explanation over the development, saying it cast doubt on the commitment of the regime of the President, Major General Muhammadu Buhari (retd.), to institutionalising the fight against criminality.

He said, “This action casts doubt on the commitment of this administration to institutional accountability and the fight against criminality.

“The AGF owes the public an explanation for dropping the charges given the sensitivity of the case.”

Ortom commiserates with late Tsav’s family over his demise