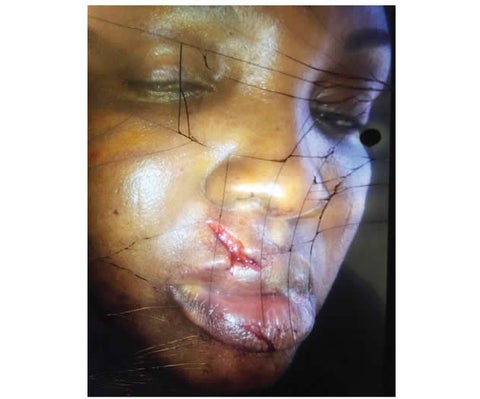 The Lagos State Police Command has quizzed its three officers for brutalising a woman.

The development followed a video where residents of Ajegunle were seen protesting against the.Nigeria Police after a woman was allegedly hit in the mouth by the cops.

The state Police Public Relations Officer, DSP, Bala Elkana, confirmed to newsmen upon inquiry that the Area B Command, Apapa, had been asked to investigate and submit a report to the state command over the incident.

The video made available to newsmen on Thursday showed about five residents dragging with the policemen, attached to the Tolu Police Division, for carrying out “arbitrary arrest,” of an Egypt-based footballer in the area.

It was discovered that the policemen–a corporal and two constables–are identified by nicknames, Ade, Tompolo and Walter.

An eyewitness, Chris Lucky, said, “The incident happened last Saturday. The policemen came to harass an Ajegunle football player, Osinachi Charles, who plays football with a club in Egypt. They approached him aggressively to come down from his car and enter their patrol van but he asked them what his offence was.

“The policeman, Ade, hit his face and shot into the air to scare people who gathered. A young lady and a six-month-old pregnant woman were trying to record the incident with their phones.

“The same policeman snatched the phones from them and also hit the pregnant woman in the face which resulted in bleeding. The intimidation and assault by policemen in Tolu division must stop. Our lives are being threatened.”

One of the witnesses also reported the incident on the Nigeria Police Force Complaint Response Unit channel.

“Your complaint is hereby acknowledged and investigation has been initiated,” the police replied in a tweet.

Elkana noted that investigation would show if the policemen were guilty or not, as they were also dragged by some residents in the viral video.

He said, “Our attention was drawn to that incident by some individuals who sent that video and photographs, alleging that a police corporal and two others who went on an assignment assaulted some persons. We launched an investigation into it. The station was aware because it was a notorious area. It’s a cultists’ den.

“We we want to find out what went wrong in the assignment because the police said they were under attack and a mob gathered round them. We could see some persons dragging them in the video. We could also see a woman that was injured. So that was why we asked for an independent investigation by the Area Command.’’