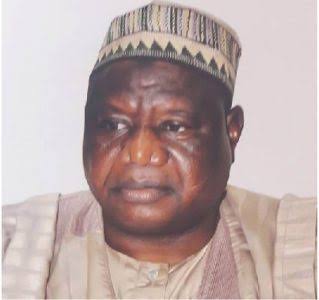 The Crisis rocking the Niger State leadership of the All Progressive Congress (APC), has taken a messy dimension as the state chairman of the ruling party; Engineer Mohammed Jibrin Imam was detained by the men of the anti- fraud squad of the State Criminal Investigation Department (SCID) of the Niger State Police Command.

Engineer Imam who drove himself in a white Toyota Hilux van arrived at the state police command headquarters in Dutse Kura – Minna, along with the state secretary of the party Barrister Mohammed Liman at exactly 1.45 pm. The two men headed straight to the office of the deputy commissioner of police in – Charge of the SCID; Tahir Ya’u where the party chairman was interrogated for close to three hours before he was ordered to be detained by the head of SCID.

Engineer Mohammed Jibrin Imam was detained as a result of a petition written to the Niger State Commissioner of police Alhaji Adamu Usman by the state financial secretary of the party Alhaji Nma Mohammed Gbagba. The petition alleges that the chairman misappropriated over 585 million naira being money realized by the party from the sales of forms from 2015 to date and from other sources.

Earlier, the chairman addressed members of the press where he debunked the allegation. He claimed that the petitioner was being mischievous in his petition and also violated the arrangement of the APC where a five – man committee will be constituted to investigate the allegation leveled against him by the financial secretary.

According to the embattled chairman, the APC leadership in Niger State is the most transparent in the country. He claimed that “all our transactions are backed by the needed documents to show at all times. For somebody to malign me on the pages of newspapers; I have left him to God to judge him. His actions have caused me and my family untold embarrassment and trauma. The police on their own part keep on harassing me without them knowing the party has its way of resolving its internal crisis.”

“Like I said earlier, I have left him to Allah, but the constitutional provision of the party will be applied to him by the committee that will be constituted to investigate this issue. It will also interest you to know that the petition in question has not been given to me by the petitioner. To the best of my knowledge, if you write a petition against somebody, that person ought to have been copied. As I am talking to you now, I have not seen the copy of the said petition he forwarded to the police, and yet they keep on humiliating me since they received it.”

“To add salt to injury, the chairman went to the bank and disconnected me from receiving further alerts on any transaction on that account. As I’m talking to you now, I don’t receive alerts on the party’s accounts anymore. By the provision of the APC constitution, four persons are signatories to the account of the party, or at least three persons. Myself as the financial secretary, the treasurer, the secretary and the chairman must sign any cheque.”

“Presently, the chairman, the treasurer and the secretary are now the only persons that sign cheques, sidelining me. Any cheque valued up to 500,000 Naira, I don’t sign as a result of this conspiracy. The only cheques I now sign are those between 10,000 to 30,000 naira to buy diesel and so on. It is as a result of this corrupt practice by the chairman, the secretary and the treasurer that I have cried out to the world to hear me since I have my name to protect.”

Alhaji Nma Mohammed Gbagba therefore challenged the chairman and the secretary of the party as well as the treasurer to do the needful by resigning their positions and submitting them for investigation. “I am calling on the governor, Alhaji Abubakar Sani Bello, who is the leader of the party in Niger State to come into this matter and investigate the chairman of the party. His Excellency should also call a larger meeting of all stakeholders of the party to look into this matter before it destroys APC in Niger State.

The party cannot claim to be fighting corruption, when its leadership is deeply involved in corruption,” Alhaji Gbagba told Journalists.