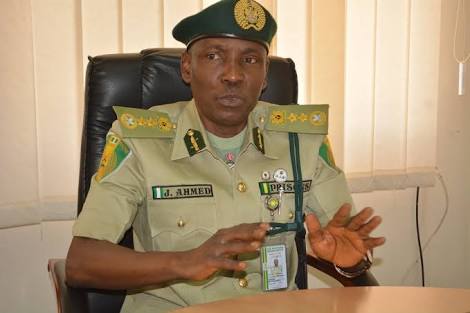 As a result of coronavirus pandemic across the globe, the authority of the Nigeria Correctional Services (NCS) has approved two Correctional Centres in Niger State to admit suspects.

The State Comptroller of the Service in the state Alh. Ibrahim Labbo Maradun has disclosed.

He said the suspects to be admitted at Correctional Centres will be monitored at the isolation facility at the centre before being taken to the custodial facility to avoid the outbreak of the Covid 19. adsbygoogle || []).push({});

The two Correctional Centres approved by the Comptroller General of the Service, Alh.

Speaking in an interview with CAPITAL POST shortly after a closed door meeting with the Chief Judge of Niger State in his office, Thursday, Alhaji Ibrahim Labbo explained that the decision to admit suspects was the outcome of the meeting of State Attorney General and Commissioner for Justice in 36 States and the Attorney General of the federation and minister of Justice Abubakar Mallami as well as stakeholders in the criminal Justice system in the country.

He disclosed that since outbreak of the Covid 19 in the country, the Comptroller General has issued a directive to all the Comptroller of the Service across the country not to admit any suspects from courts, but those inmates on awaiting trial can be released on court order.

He said: “No new suspects will be admitted in any of our custodial centres across the country due to the Covid 19 pandemic.

However, CAPITAL POST findings revealed that since the out break of Covid 19 pandemic in the country, the authority of the Correctional Service has ordered the various State commands not to admit suspects from courts across the country to avoid any possible contact of the pandemic by those inmates already in the custodial Centres.

“As a result of the directives of the Comptroller General, men of the State Criminal Investigation Department ( SCID), of the Niger State Police Command kept suspects in their custody on court orders.

“Already, police formations across the state is filled with suspected criminals in their detention facilities without taking them to court for prosecution.

“Most of the suspects in SCID and police cells across the state, were those of capital offences of armed robbery, armed bandits, culpable homicide, rape, among other heinous crimes that were kept on court order pending when courts will resume sittings.

“Only two Chief Magistrate courts are allowed to preside over cases on the instructions of the chief Judge of the State, Justice Aliyu Mohammed Mayaki.

“Most of the Magistrate and Shari’a Courts in Niger State are closed due to the coronavirus pandemic.