Leader of the Indegenous People of Biafra, Nnamdi Kanu has described his kinsmen as wicked and stingy, saying that their attitude would not stop the realisation of Biafra project.

He revealed that Biafrans in the United States of America have contributed $2,300 into his defence fund which would be utilised for the realisation of the Sovereign State of Biafra.

Director of Media and Publicity of the separatist group, Emma Powerful said Kin a statement on Tuesday.

The group’s reaction followed alledged embezzlement of funds contributed into the coffers of IPOB by some countries and individuals across the world.

Nnamdi explained that the total amount contributed by ‘Biafrans’ globally was $143,000.00, which he said, “Is less than what I spend every single month to run IPOB worldwide. ”

“All those foaming around the mouth about a defence fund never contributed a penny to it. Not minding the sheer wickedness, apathy, gossipy and stingy nature of Igbo leaders, we have continued to defend Biafraland with very limited resources against Fulani Jihad budget of over $22bn, not including Nigerian Army and Police. 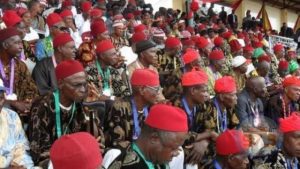 “They forgot that I am a child of Chukwu Okike Abiama, under the most sacred and inviolable oath to restore Biafra and therefore incorruptible, unbribeable and uncompromiseable.”

Related Topics:IgboIPOBNnamdi Kanu
Up Next