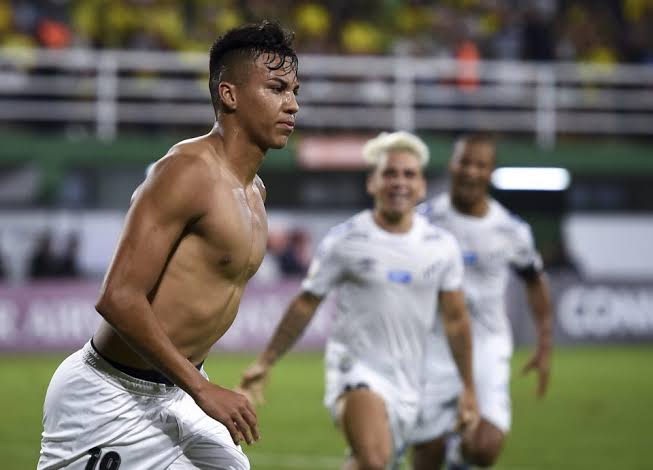 Chelsea have expressed their interest in Santos centre-forward Kaio Jorge, reports claim. The teenager has also attracted interest from Bayer Leverkusen and has been likened to Juventus superstar Cristiano Ronaldo.

The 18-year-old is considered one of the brightest prospects in South American football having scored seven goals in 11 appearances for Brazil’s Under-17 squad.

And, according to German publication Kicker , Frank Lampard wants to bring him to Stamford Bridge in the upcoming transfer window.

The striker was widely expected to join Juventus before the coronavirus pandemic – but their interest has waned and other potential suitors have spotted an opportunity.

Bundesliga side Bayer Leverkusen are one of those sides, but Chelsea could hold a significant advantage over their rivals.

And that’s because Jorge, who has a £69million release clause in his contract, shares the same representative as former Chelsea pair Oscar and David Luiz.

The Blues have done plenty of business with agent Giuliano Bertolucci over the years and could utilise their relationship to bring Jorge to west London.

Quizzed about speculation linking him with a move away from Santos, Jorge recently said: “I leave these things to my agent. I don’t get involved, he manages them.

“Right now I’m very happy at Santos and I want to keep doing well, growing and improving my football. Every day I learn something new and get stronger.”

Lampard has already discussed his plans for the summer and admitted he his was looking for a ‘few new additions’ ahead of the 2020/2021 campaign.

“I’m certainly excited about the squad we’ve got, with the young players and if we can get a few additions for areas I feel we need,” he told Chelsea’s official magazine.

“We didn’t bring in anyone in January, it didn’t work out to be right for us at the time, and last summer we couldn’t bring anyone in, so those windows are gone and we haven’t changed.

“So I am excited about the squad we’ve got, if we can freshen up in the right areas we all know that.”

Related Topics:ChelseaKaio Jorge
Up Next