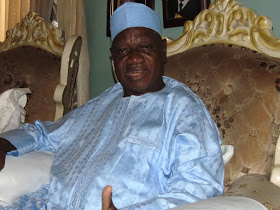 He also suspected that Igala people might have offended Buhari’s friends too, saying that he didn’t see them as anything or consider them for anything in this administration.

He berated Buhari for being ethnocentric in the handling of state affairs, noting that after stakeholders from Kogi East have had two separate meetings with the Vice President, Prof. Yemi Osinbajo, nothing came out of it.

“At my age I cannot be playing local politics though I hold meeting with aspirants who came to my office in my area, Kogi East.

“It would look like if some people from there offended the President and his friends.

“They have starved us of everything under the sun. We have complained. We have had two meetings with the Vice President on this matter.

“In the last appointments they made, they appointed people into boards and parastatals, Ekiti State had 7 chairmen and 27 members. Ekiti is smaller than Kogi, but Kogi had 3 chairmen and 5 members.

“I am just using the two. I don’t want to talk about how many people Kano got or Borno got; I am just comparing two States that are about the same size and when you come to Kogi the three people they made chairmen are from Lokoja/Kotokarfe axis.

Read Also:  NBC boss commends Buhari for his commitment to Digital Switch Over

“Then this new dispensation, he appointed Ramatu Abdullahi as minister from Kogi, again from Lokoja/Kotokarfe and we are expected to be clapping?

Senator Kadiri lamented that he could no longer go home as a result of pressures from the people who would ask questions he cannot answer.

He said, people would ask questions and insult them, adding that the ruling All Progressives Congress (APC) was being demarketed daily in that part of the country.

“Some of us have lost face at home and because of insults, questions and answers, I have not gone home for six months.

“I cannot defend the action of the President, once they see your car, they will start bombarding you with questions that you cannot answer.

“The Government is demarketing APC in my part of the country. This is the kind of thing Colonel Umar is talking about because I am sure he must have ran into one or two persons from my area who woukd have told him this story in details.

“It is wrong but we see dead people being appointed into boards while the living are looking for these appointments but they cannot get”, he said.