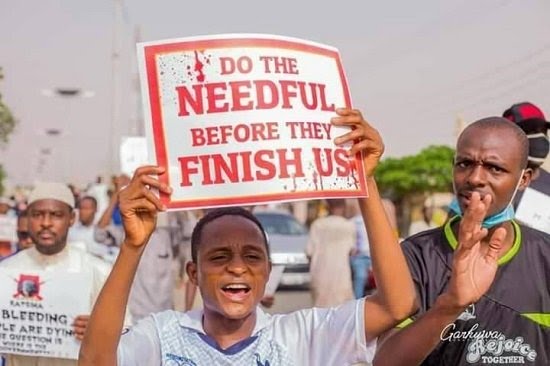 Some youth in Katsina state under the aegis of Coalition of Northern groups on Tuesday stormed the State government house in protest over endless attacks by bandits and other criminal elements.

Tuesday’s protests comes a week, after a billboard bearing the picture of President Muhammadu Buhari and Aminu Masari, governor of the state, was burnt by protesters in Yantumaki town, Danmusa Local Government Area of the State.

Unfortunately, after the Yantumaki protest, more than 40 residents were immediately maimed by bandits.

Some of the inscriptions on their placards were: “Buhari/Masari resign if you cannot protect us”; “End Banditry in Katsina”; “Enough is Enough”; “Katsina is a home of hospitality”, “We need peace”.

While chanting solidarity songs for residents who have been killed by bandits, they called on the State governor, Alhaji Bello Masari to stop giving further excuses.

Read Also:  Jonathan tells Aminu Shagari to emulate late father, says he has forgiven for working against him in 2015

They accused Masari of giving too many excuses, while asking him also, for his immediate resignation as governor of Katsina State.

During the weekend, Masari had said he had failed in his duty to protect residents. 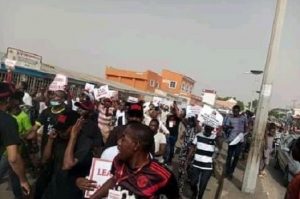 “I don’t know what to tell them. I cannot look at them in the face because we have failed to protect them, contrary to our pledge to ensure the security of lives and property throughout the state,” he had said.

CAPITAL POST recalled that the State government had few months ago entered a peace agreement with the bandits, but didn’nt yield positive results and residents in various communities were being attacked daily.

A situation that Katsina Stare later pulled out of the peace deal with bandits.