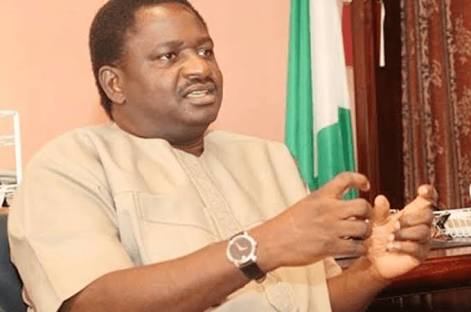 The Senior Special Adviser to the President on Media and Publicity, Femi Adesina has described as uncharitable the branding of President Muhammadu Buhari as a failure by the Northern Elders Forum.

Professor Ango Abdullahi led Northern Elders Forum had during the weekend x-rayed the administration of President Muhammadu Buhari in terms of security and scored him low, saying that he was a total failure.

Worried by the damning comments by different individuals and groups over insecurity in the North ocasioned by terrorists and bandits, the presidential aide
warned Nigerians against describing President Muhammadu Buhari as a failure.

He said those branding Buhari a failure should understand security of a nation was an ongoing thing.

Adesina spoke during an interview on Channels Television’s Politics Today on Monday, argued that government was working to address the issue of insecurity and others, hence it would be wrong and uncharitable to brand Buhari as a failure.

“Government is working at it and it is a work in progress. Let nobody come and say nothing is being done and the government has failed, that will be uncharitable.”

He further explained that it was not up to presidency to change tactics in securiry approaches, but the experts on the field.

He said, “When it comes to strategy, it is not for us to say or determine. It is for experts in that area to review strategy and if there is a need to change it, they will do.

“From time to time, there are reviews. How do you know that the strategies remain the same? Strategies change from time to time. We don’t go to the front, we don’t know. It is not for us to determine whether this strategy is right or wrong.”

Attacks by terrorists, bandits, cattle rustlers, and kidnappers among other criminal elements across the country, especially the north east has seemingly become a regular occurrence in the country leading to loss of many lives and property.

However, Adesina maintained that Buhari remained committed to secure the country and fight such crimes.