Kogi State Governor, Alhaji Yahaya Bello on Friday in Lokoja reacted to the claim to Ajaokuta, Lokoja and Koton-Karfi by the Attah Igala, Micheal Ameh Oboni II, through a Federal High Court judgement.

Bello’s warning was at the instance of a Federal High Court judgement in Lokoja this week to the effect that Lokoja, Ajaokuta and Koto Karfe belongs to the traditional Igala Kingdom.

At a press conference, Bello said “the state would come hard on people trying to factionalize the state, noting that his administration was about unity of the State.

He however called on the affected people to seek legal solution rather than causing confusion by taking laws into their hands.

According to him, the State has the capacity to deal ruthlessly with anyone who tends to promote imperialism, no matter how highly placed, hence, the State would not fold it’s hands.

Bello said that the judgement should not be seen as an avenue to be exploited to foment trouble or fan embers of division and disunity. 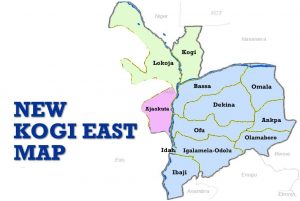 “I advise those who may want to test the will of this administration to desist in their own interests as we will not spare any means to restore normalcy where they may want to break the law,” Bello said.

According to him, “This administration has toiled tirelessly to enhance the unity of the state.that is why we invented the acronym EBIGO, meaning Ebira, Igalaland, Okun to further underline the seriousness with which we uphold the unity of this state.

“We will not hesitate to deal decisively with anyone no matter how highly or lowly placed,” he added.

“We have been leaving happily together as one irrespective of tribal differences also embarked on intermarriages so we should not allow such judgement to divide us like it a civil and institutional matter.

He, therefore, urged his constituents to apply diplomacy and maintain peace and harmony within the domain and stop spreading further rumours that may cause disunity among the people.

“Ajaokuta is one and we should not allow ourselves to be divided as our unity has come a very long way.