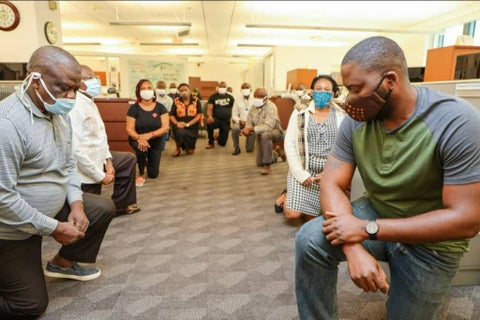 Staff of the Nigerian Embassy in Abuja on Monday protested the killing of African-American, George Floyd last week by the US police.

Protests have rocked parts of the United States including the White House in what the protesters described as height of racial discrimination.

Unarmed George Floyd was killed after he was arrested by the Police who knelt on his neck with his hands chained backwards, as seen by CAPITAL POST in a video.

The way and manner George Floyd died was demonstrated by the embassy staff in Abuja, when it posted a photo of its staff going down on one knee, a gesture that shows support for the ‘Black Lives Matter’ movement.

The US embassy was optimistic that Nigerians and Americans would use the opportunity to promote peace and harmony among all humans.

It reads: “Today at 12:00 noon [WAT], the entire US Embassy Abuja community joined together in 84 seconds of silence in solidarity with those at home and around the world protesting the murders of George Floyd and others.

“This is marking two weeks since George uttered the words ‘I can’t breathe’ numerous times before his tragic death.

“Now, it is time for healing, for compassion, greater communication, and increased understanding. We sincerely hope that all of us, Americans and Nigerians, will learn from this episode and use it as inspiration to create a better world.”