The Edo State governor, Godwin Obaseki who was disqualified from contesting the governorship primary election by the screening panel of the ruling All Progressives Congress (APC) has disclosed that he will meet President Muhammadu Buhari over the development.

Those he has visited on Sunday are Peoples Democratic Party (PDP) governors.

In a post on his verified Twitter handle on Sunday, the governor described his disqualification as an act of injustice.

“I appreciate the sustained show of solidarity, support and goodwill from Edo people and Nigerians in the face of injustice by the @OfficialAPCNg screening committee,” he wrote.

“I will be making my next move known after I complete consultations with my supporters and meet with @MBuhari.

However, the agenda of the meeting with the PDP governors were not revealed to anyone but Obaseki is believed to be on consultations with them after he was disqualified by the All Progressives Congress. 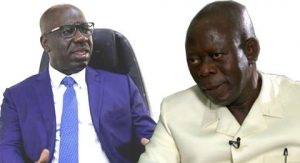 However, Obaseki’s resolute on not appealing his disqualification has fuelled speculations that he might have been on his way to the Peoples Democratic Party.

Moreso, the University of Ibadan has faulted a claim made by APC that the institution awarded two certificates with separate dates to Edo State Governor, Godwin Obaseki.

The institution’s registrar, Mr. Olubunmi Faluyi, while speaking to newsmen on Sunday in I in Ibadan restated that Obaseki remains an alumnus of the institution.

Faluyi said the institution’s stand remained as contained in an earlier statement that “Obaseki gained admission to the University in 1976 and graduated in 1979 with a Second Class Honours, Lower Division. Records of his Admission and Graduation are intact in the archives of the University.”

In the same vein, the varsity’s Director of Public Communications, Olatunji Oladejo, added that the claim by the APC was not true.

“We stand by our statement on Obaseki. How can you issue two certificates to a candidate? That is not true. It is not possible. He graduated in 1979 from the university. We issued only one certificate to him not two,” Oladejo said.

The APC had stated discrepancies in the dates on Obaseki’s UI certificate as one of the reasons for his disqualification from the June 22 governorship primary in Edo State.

Obama presenting its report to the National Working Committee headed by National Chairman, Adams Oshiomhole, on Saturday, the APC Screening Appeal Committee led by Abubakar Fari, said, “It is inconceivable that the same University will award two certificates with separate dates for the same graduate.

“We also find it difficult to vouch for the authenticity of his National Youth Service Corps certificate, there is no indication as to where he served. We find that he should be disqualified.”

Oshiomhole commended the chairman and members of the appeal committee for doing a “meticulous” job.

“It appears you were extremely meticulous to details and you justified our-not in terms of your findings but in terms of what you were able to amplify. That you have an eye for very important details.

“We are happy you were able to finish this work timeously. This is the final appeal level, what is left now is the NWC will meet and take a decision one way or the other,” he said.

In a related development, the factional camp of All Progressives Congress (APC) in Edo has recommended Governor Godwin Obaseki and two other party chieftains for expulsion over alleged anti-party activities.

It asked the Comrade Adams Oshiomhole-led National Working Committee (NWC) to expel Obaseki, who was recently disqualified from the primaries of the party and factional chairman of Edo APC Anselm Ojezua and Organizing Secretary of APC Dr. Aisosa Amadasun.

The Col David Imuse-led faction told reporters on Sunday the alleged anti-party activities would no longer be condoned.

It said: “Obaseki, Ojezua and some other persons have gone to court, in violation of Article 21, Sub-section D5 of the APC’s Constitution in many court cases at the Edo State High Court and the Federal High Court.

“They have shopped for injunctions and rulings to circumvent the processes of law and the provisions of our party’s constitution, in defiance of democratic norms.

“In the light of this, the State Working Committee (SWC) of APC in Edo State has recommended to the NWC that the following persons: Godwin Obaseki, Anselm Ojezua and Dr. Aisosa Amadasun, be expelled from the party, for violating the provisions of our constitution.

“It should be stressed that after the bitter experience of losing the governorship of Bayelsa State in the court, after a well-deserved victory in the election, it will be foolhardy to allow a candidate with dodgy and faulty academic credentials to fly our party’s flag in the September 19 poll.

Even the Holy Book admonishes us that affliction shall not arise a second time. Wisdom profits to direct.

“We wish to appreciate members of the APC in Edo State for their resolute determination to uphold the mantra of our party, especially in the face of the oppressive and draconian administration of Obaseki in the last three and a half years.

“Our consolation is that the screening committee has given us hope that there is light at the end of the tunnel.”

However, Ojezua referred to Imuse and his “co-travellers” as impostors who are simply being mischievous and ignorant.

Ojezua, who is the pro-Obaseki chairman of Edo APC insisted that Imuse has no legal right to speak for APC in Edo State and therefore all his statements are of no effect.

“He simply displayed mischief and ignorance. Everything he said is of no effect and it should be ignored.

“Imuse is the subject of contempt proceedings which I initiated and which I will pursue to a logical conclusion. Right-thinking members of the public should disregard the lies of drowning Imuse and his confused supporters.”

Similarly, the Edo State Chapter of the Peoples Democratic Party (PDP), has applauded Governor Godwin Obaseki’s developmental strides in the various sectors of the state.

The Chairman, Edo PDP, Dr. Tony Aziegbemi gave the commendation after inspecting facilities at the Samuel Ogbemudia Stadium in Benin City, ahead of the party’s forthcoming primary election scheduled to hold on June 19th 2020.

Addressing journalists at the stadium, the state PDP chairman expressed appreciation to the governor for approving the use of the Samuel Ogbemudia Stadium for the conduct of the party’s primary election.

He noted that the PDP is very impressed with the transformation of the Samuel Ogbemudia Stadium, adding, “We are going ahead with our preparations and on the 19th of June, we are coming here to do what we know how to do best, and we will do it peacefully.

“We have 2,100 delegates. The stadium has a capacity for 15,000; so as you can see, we are going to maintain social distancing. We will abide by the rules and regulations as contained in the Gazette by the state government.”