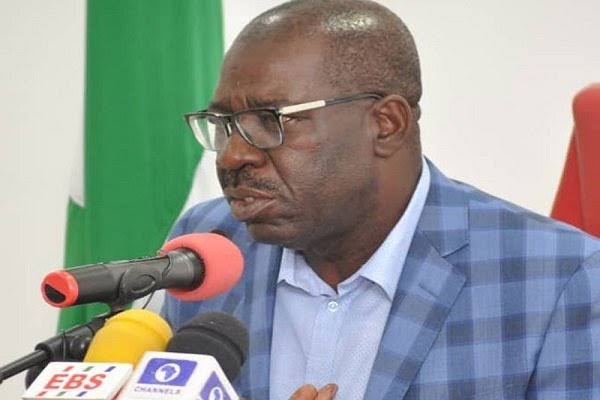 Edo State governor, Godwin Obaseki on Tuesday issued fresh directives that all his colleagues coming to Benin for the APC governorship primaries must be quarantined.

He reminded anyone coming into Edo State that the ban on interstate movement is in force as a result of the coronavirus pandemic.

He advised APC governors preparing to observe the APC party primaries to stay put in their States or be ready to be quarantined.

The governor also admonished the National Chairman of the ruling All Progressives Congress, Adams Oshiomhole who is currently abode in Abuja not to visit Edo State.

He said: “Any busy body Governor that steps into Edo State for APC Gubernatorial Primary Election would be quarantined.

“There’s no inter state movement, so everyone should stay in his or her base.

“Adams Oshomhole should also stay in Abuja to avoid being quarantined.

“There’s also ban of not more than 20 persons per gathering so APC should addhere to this in respect to their intended primaries and campaigns”, Obaseki insisted.

Read Also:  Why I pushed for direct primaries - Gbajabiamila

CAPITAL POST learnt that the National headquarters of the APC was contemplating of conducting the exercise outside the State, but was faced with the illegality of it.

Edo guber: Obaseki to disclose next move after meeting with Buhari