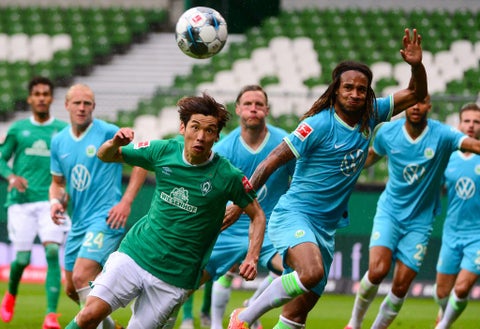 ‌
VfL Wolfsburg striker Wout Weghorst scored with only eight minutes remaining to hand the visiting team a 1-0 win at Werder Bremen on Sunday and push their hosts closer to relegation from the Bundesliga.

 
A return to form for the Dutch international ensured Wolfsburg moved up to sixth place, jumping above Hoffenheim, and putting themselves back in place to qualify for next season’s Europa League.

Werder Bremen, who have been in the Bundesliga longer than any other club, remained second from bottom as their winless run at home in the German league was stretched to 13 games.

They are six points adrift of 15th-placed Mainz, who are just above the relegation zone, with just four games remaining.

 
Both clubs were full of endeavour in the rain at the Weser Stadium but did not create many clear-cut chances.

Wolfsburg had the first real effort of the game after 12 minutes when Josip Brekalo shot wide, followed immediately after by a breakaway opportunity for Weghorst, who cleverly pushed the ball around a defender but proved unable to do the same to home goalkeeper Jiri Pavlenka.

At the other end, Wolfsburg’s keeper Koen Casteels pulled off a good stop to save from Yuya Osako’s curling shot just past the half-hour mark.

It took until the last 10 minutes for the next decent opportunity as Wolfsburg’s Xaver Schlager thundered a shot against the crossbar followed quickly by the goal.

It was set up by strong defensive work from Swiss international Kevin Mbabu, who initiated the counter attack that was completed when Weghorst peeled off from his defenders to head home at the near post, and end a run of four games without a goal.

Wolfsburg can consolidate their bid for European club competition next season by beating Freiburg next Saturday.

Werder are next away at bottom-placed Paderborn on Saturday, desperately needing points in their bid to stay up.