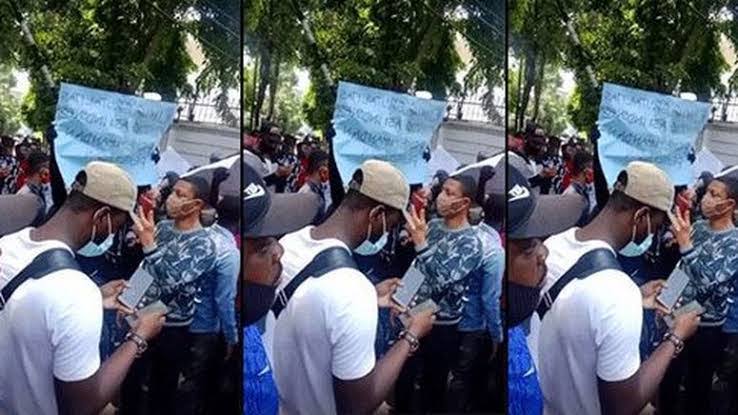 Just recently, a residential building belonging to the Nigerian embassy in Ghana was destroyed by “unknown persons.” The huge dust generated by this condemnable act had not yet settled down when another episode played out again in Indonesia. Sadly, the perpetrators of this dastardly act were identified as mostly Nigerians from a particular region of the country.

This appalling act was executed as part of a demonstration against what this group of ‘business people’ termed as Nigeria government’s lukewarm response or negligence while their human rights were being violated by Indonesian immigration officials.

This shameful scenario was reportedly enacted as a result of the untimely death of a Nigerian man identified as Chike Ogodor, from Uli, Anambra state. He was said to reside at Gading Nias apartment in Kelapa Garden Central Jakarta, Indonesia. Reports had it that Chike’s death occurred while he was trying to escape through a window on the 12th floor of the Gading Nias apartment to escape from approaching immigration officers. Apparently, the late Chike was staying in Indonesia illegally; otherwise, he would not have attempted to escape from immigration officials.

This so-called demonstration provokes salient questions: should Nigeria’s government rise to protect its citizens when they violate extant laws in the name of finding greener pastures in a foreign country? What part of Nigeria are these demonstrators from? What could be their real motive other than the reasons they claimed for their demonstration? What message were they trying to get across to the rest of the world by destroying Nigeria’s flag?

For a very long time, Nigeria’s reputation abroad has been dented by some of its citizens mostly from a particular part of Nigeria. This same group is reputed to be engaged in criminal activities in Indonesia. This made the Asian country to review its visa procedure for Nigerians in 2016 as announced by Harry Purwanto, its ambassador to Nigeria.

That same year, Humphrey Jefferson Ejike and Michael Titus Igweh, both of them from eastern Nigeria, were sentenced and executed by firing squad at Nusukambangan prison island in Indonesia for drug related crimes.

In 2018, the federal government of Nigeria through its foreign affairs minister Geoffrey Onyeama, pleaded with Indonesian government through Mrs Retno Marsudi, his counterpart from that country to commute the death penalties of several Nigerians presently on the death row in Indonesian prisons.

As a matter of fact, the federal government had pleaded several times for Nigerians on death row in Indonesia. In May 2012, February 2013, March 2015 and July 2016, Nigeria sought clemency for its citizens on the death row in Indonesia. Expectedly, the Asian nation turned a deaf ear to these series of pleas, and went ahead to carry out sentences according to their laws.

Nigeria’s ambassador to Indonesia once revealed that; “there were about 5,000 Nigerians living in Indonesia. This figure may just be a fraction of the total number of Nigerians, as most Nigerians in Indonesia are unskilled and mostly undocumented and, therefore, remain in hiding. Less than 3 percent of the total known number live legally and are engaged in legitimate businesses in the country. It is a pity that a greater percentage of our citizens living in Indonesia are not gainfully employed, but are engaged in vices. Drugs used to be associated with our citizens.”

Read Also:  Nigeria: A country sinking under its own weight

Those who invaded Nigeria’s embassy and vandalized properties belonging to its government have exhibited criminal and disgraceful behavior that must be condemned in very strong terms.

Accusing Nigeria’s government of not protecting them from Indonesian authorities, even when less than 3 percent of Nigerians in that country are not only staying there illegally, but are mostly involved in vices, speaks volumes.

It simply translates to the fact that this group of Nigerians who attacked the embassy cannot differentiate between criminal activities and legitimate enterprises. To this group of people, it is okay to be a criminal as long as you can make some good money out of it.

Nigeria’s government must take a firm stand that it is not a government that condones or supports its citizens when they are involved in criminal activities abroad. These unpatriotic Nigerians must be identified as soon as possible and be extradited to Nigeria to face the law because an attack on Nigeria’s embassy which is home away from home is an attack on its sovereignty.

The fall of Magu: A lesson for Nigeria’s power wielders