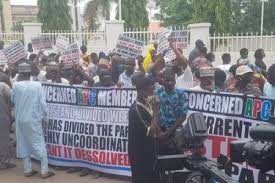 Protesters on Monday besieged the National headquarters of the ruling All Progressive Congress (APC) asking for dissolution of the National Working Committee (NWC) within 72 hours.

Protesting members of the APC told President Muhammadu Buhari to disband the NWC, saying they have failed.

Protesters under the platform of Concerned All Progressives Congress members said the crisis rocking the party would consume it if President Buhari failed to intervene immediately.

Leader of the group, Opokwu Ogenyi, said the present NWC had caused more harm and bastardised the party and that there was the need to salvage the party from total collapse.

Opokwu said, “This present National Working Committee has caused us to lose seven states to the opposition. APC had twenty four states governors before the present NWC, today we have 18 governors. Just yesterday, the deputy governor of Ondo State left us and joined opposition Peoples Democratic Party. ”

Opokwu berated the leadership crisis that has engulfed the ruling party leading to four individuals laying claim to the Acting National Chairman position.

The group maintained that any attempt to keep the NWC further would destroy and disintegrate the party, insisting that protest would continue to other States if nothing was done.

Read Also:  Israeli ambassador to the UK rushed out of LSE amid tense protest over her appearance 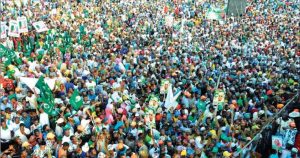