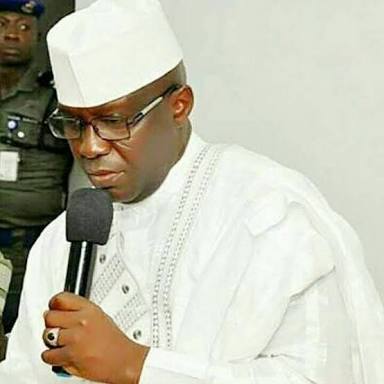 Nasarawa State Governor, Engr. Abdullahi Sule has ordered the immediate sack of the State Secretary to the Government (SSG) over his involvement in contract scandal to the tune of over N300 million.

The SSG was investigated by the State House of Assembly Ad-hoc Committee on renovation and fencing of Nasarawa State public schools and was found culpable in a report by the Chairman of the Committee, Hon. Daniel Ogazi.

While presenting the report, Ogazi said the SSG was involved in the embezzlement of over N300 million when he was the Commissioner for Education in the immediate past administration of Alhaji Umar Tanko Al-Makura.

According to the report: “Out of N1.4 billion released for the renovation of Secondary Schools in Nasarawa State, Alhaji Aliyu Tijani who was the Commissioner for Education when the contract was awarded by the
previous administration couldn’t account for about N300 million. ”

Though, the sack letter dated 8th June, 2020 which was addressed to the SSG relieving him of his appointment by Governor Abdullahi Sule, didn’t state reasons; it might not be unconnected with the fraud allegation against him by the State Parliament.

Part of the letter reads: “His Excellency, the Governor of Nasarawa State, Alhaji Abdullahi Sule has approved the relieve of appointment of Aliyu Tijani as Secretary to the State government. 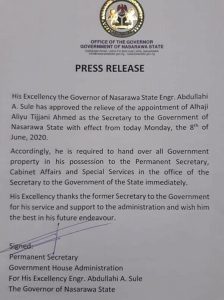 The letter which was signed by the Permanent Secretary (Government House Administration) urged the former SSG to hand over government properties in his care with immediate effect.

CAPITAL POST reports on Tuesday June 3 that the former Nasarawa SSG has been investigated and indicted in a whopping N300 million.