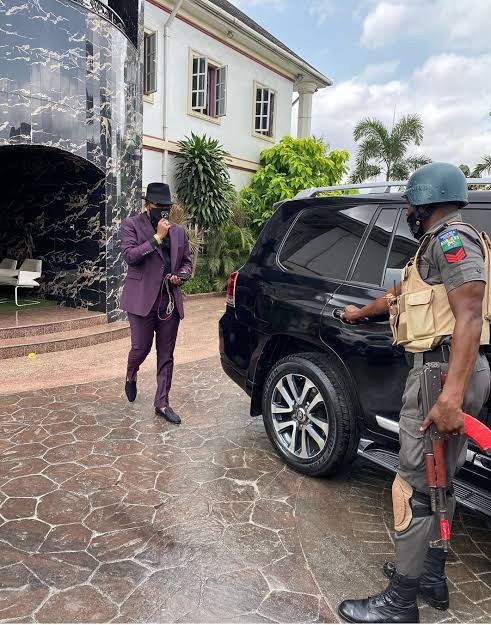 Appauled by his oversized lifestyle, the Inspector General of Police monitoring department on Tuesday grilled  the Chairman of Five Star Group, Emeka Okonkwo aka E-Money, for six hours.

He arrived at the has left police the Police Headquarters Annex, Kam Salem, Obalende, Ikoyi, around 1pm in a wine-coloured suit on the invitation of Police.

Insider source hinted that “E-Money and two others met with the detectives and were interrogated.

They were sais to have responded to seceral questions put to them by the police, after which “somebody took his bail and he was allowed to leave and return on Wednesday for more questioning.”

“The exercise lasted about six hours.”

E-Money’s flamboyant way of life has made the Inspector General of Police, Adamu Abubakar to order for his investigation, source said.

The IGP also alledged that E-Money was involved in the flagrant abuse of police escort and uses them as domestic servants, a development that irked him.

It was gathered that all the six policemen attached to E-Money, who is the brother to musician, Kingsley Okonkwo aka K-Cee, were said to have been withdrawn, saying that  the officers were illegally attached to him.

A top police officer said, “We received a signal from the Force headquarters on Monday that the police detail of music executive, E-Money, be immediately withdrawn and an investigation into the man be launched.

“The IG was surprised that policemen were attached to him in the first place and were being used like domestic servants, carrying umbrellas, opening doors and doing menial jobs for him.

“The policemen were discovered to be attached to B Operations at the command headquarters and not MOPOL which is the usual practice. So, we have withdrawn his policemen and we are inviting him for questioning. The policemen will also be interrogated.”