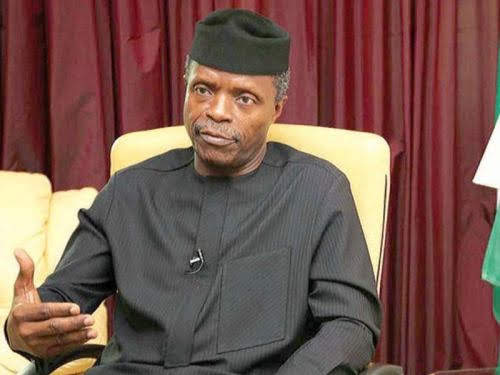 The Peoples Democratic Party (PDP) on Monday reminded the Nigeria’s Vice President,  Yemi Osinbajo that he needed to come clean on the alledged N5.8bn National Emergency Management Agency scandal for which he allegedly has questions to answer.

The opposition PDP asked President Muhammadu Buhari who sacked the former Director General of the National Emergency Management Agency (NEMA), Engr. Mustapha Maihaja, a day earlier to prosecute him if he was serious with the anti-corruption fight.

The party said the former DG of NEMA who was also indicted by the legislature over the alleged embezzlement of N33bn in the agency, is a notorious fact that should not be swept under the carpet.

This was contained in a statement signed by the PDP National Publicity Secretary, Kola Ologbodinyan, in Abuja, on Monday.

The PDP said, “Our party believes that the failure to prosecute the indicted former NEMA Director General is a ploy to shield very top officials in the All Progressives Congress-led administration, who are alleged to be involved in the series of scam in NEMA, while the masses, for whom the fund was meant to serve, continue to suffer neglect and untold hardships.

“The PDP insists that the sacking of Maihaja should not be used as an excuse to foreclose an investigation into the huge fraud in NEMA under Vice President Osinbajo as Chairman of Governing Board.

“The party describes the sleaze in NEMA as an indelible smear on the Buhari Presidency and charges the Economic and Financial Crimes Commission to immediately take in  Maihaja for questioning and if found wanting, prosecuted.

“The party notes that the Vice President had failed to provide cogent response to the report of the House of Representatives on the N33 billion NEMA fraud  in addition to allegations that the N5.8 billion was withdrawn from the national coffers, while he was acting President, without legislative consent and expended without recourse to extant due process, procurement and contract rules.”

The party recalled that investigations by the House exposed the false claims that the fund was spent on the procurement of grains under the emergency intervention on food security in the North East as well as purchase of 5,000 metric tons of rice donated to the World Food Programme for distribution to victims of insurgency in the region.

Ologbondiyan berated the executive arm of government to have spared Maihaja of prosecution, suspecting that there was complicity in high places despite his indictment by the House of Representatives.

When contacted, the Chairman of the Buhari Media Organisation, Niyi Akinsuyi said, “The PDP is simply being hunted by the ghost of its corrupt past. They have a way of trying to make an issue out of matters that have been settled in public space.

“This allegation they are trying to level against the Vice President went up to the National Assembly, the VP even offered to set aside his immunity in order to be investigated, the request was turned down.

“A thorough investigation was carried out and he was given a clean bill of health. The removal of the NEMA DG is the prerogative of Mr President, he hired the DG and decided to replace him to enhance service delivery.”

Related Topics:NEMAPDPYemi Osinbajo
Up Next