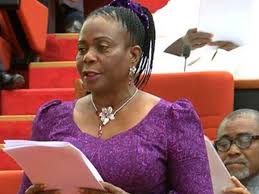 The caucus loyal to Senator Biodun Olujimi in Ekiti State People’s Democratic Party (PDP) on Thursday suffererd a major setback in its bid to grab the control of the party in the state, as the Federal High Court, in Ado Ekiti refused to grant its request to prevent the inauguration of the Ward Executive Committee members of the party elected at the March 7, 2020 Ward Congresses in the state.

This is even as members of the Executive Committee of the PDP in 155 out of the 177 wards in Ekiti State have assumed office for a four-year tenure, after they were sworn on Thursday, in accordance with the party’s constitution.

In the Suit Number FHC/AD/CS/14/2020, Justice U.N. Agomoh, while dismissing the ex-parte application filed by one Oladimeji Samson Olalekan and others, against the March 7, 2020 Ward Congresses of the PDP in Ekiti State, said “the interest of justice will be better served by hearing the parties in this suit. ”

Olujimi, had through Oladimeji Samson Olalekan and others, filed a motion ex-parte, seeking an order of the court, restraining the PDP National Working Committee (NWC) from announcing, publishing, and recognizing any list as result of election of Ward Executives and three ad-hoc delegates held on March 7, 2020, as well as an order restraining the party from acting on, or making use of the names of winners of the Congresses for the purpose of the Local Government, State and Zonal Congresses.

The plaintiff also sought an order restraining the PDP NWC from going ahead with the Local Government, State and Zonal Congresses without first resolving the issue of the Ekiti State Ward Congresses.

In her ruling today, Justice Agomoh said, “I have carefully studied this application ex-parte just argued and also taken benefit of the written and oral arguments of the learned senior counsel vis a vis the reliefs sought. It is not disputed that the congresses in issue have since been concluded. Let me also put on record the fact that it is correct as submitted by learned counsel that they also filed their motion on notice.

“Consequently, I order the service of motion on notice already filed and fixed same the 27th of May 2020 alongside all pending applications for hearing. This date must be confirmed as it depends on the state of the Nation in view of the pandemic at the moment.”

Meanwhile, members of the Executive Committee of the PDP in 155 out of the 177 wards in Ekiti State have assumed office for a tenure of four years, after they were sworn in today, in accordance with the party’s constitution.

The Ward Executive Committee members were sworn in by a Notary Public, Barrister Niyi Idowu, in accordance with the provisions of Section 65 of the PDP Constitution as amended in 2017.

In a letter dated April 30, 2020 and addressed to the party through the State Legal Adviser, Barrister Niyi Idowu said; “Kindly be informed that upon submission of the duly completed Oath of Office and Oath of Allegiance form today Thursday 30th April2020 by 7:30am and in line with the provisions of Section 65 of the People’s Democratic Party Constitution, the newly elected Ward Executive Officers of your party whose names were verified and contained in a letter with reference N0. PDP/DOM/GF.V/VOL.2/20-387B are admitted to Oath and therefore sworn in already to function in their various offices.”

In a letter with ref no: PDP/DOM/GF.V/VOL.2/20-387B dated April 25, 2020, and signed by the National Organising Secretary, Col Austin Akobundu (rtd), the NWC had directed the State Chairman of the Party, Chief Barr. Gboyega Oguntuwase “to take necessary and appropriate steps to Inaugurate the new Executive Officers in accordance with the provisions of Section 65 of our Party’s Constitution as amended in 2017.”

In the letter, the NWC had listed names of the Ward Executives for 155 out of the 177 wards in Ekiti State that emerged in the Ward Congresses held on March 7, 2020. The party stated that the Congresses did not hold in Gbonyin and Ekiti East local councils.

The NWC said that the new Exco members shall hold office for a period of four years “pursuant to Section 47(1) of our Party’s constitution as amended; (i.e. April 30, 2020 – April 30, 2024, for Ward Executives.”
Olujimi is in her second term as lawmaker representing Ekiti Central Senatorial district.