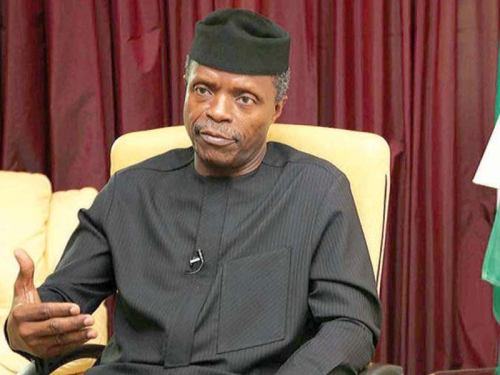 Following public concerns over the whereabout of the Vice President Yemi Osinbajo since COVID-19 debuts in Nigeria, he revealed on Saturday that he has been available, but busy with official assignments in past weeks.

Reacting through his spokesperson, Akande Laolu, Osinbajo said that he has been attending to official matters on how to improve Nigeria’s economy.

Laolu who spoke through an instagram told Nigerians to ignore fake claims regarding President Muhammadu Buhari and the Vice President’s whereabouts.

He recalled that the Vice President on Thursday met with the Governor of Central Bank, CBN, Kaduna State Governor, and some Ministers via video conferencing.

According to Laolu: “With my boss the Vice President last night in his office, reviewing some of the events of the week.

“By the way continue to ignore professional fake news conduits who share fictions about the whereabouts of the president and his Vice.

“The critical mass of our people see both the president and the VP regularly on TV, hear about them regularly on radio, read from them in the press and observe their activities regularly on the social media.

“For instance, on Thursday the VP held a videoconferencing meeting that included the governor of Kaduna, Power and Finance Ministers, the CBN governor and other government officials on how to expand electricity in the country.

“The work goes on, and Nigeria will surely prevail. We will do it together.”

Osinbajo’s absence from public view in the past weeks had sparked some form of conspiracy that he may have contracted COVID-19 or he’s in trouble.

However, Buhari’s Special Adviser on Media and Publicity, Femi Adesina, had explained that Osinbajo has been busy working with the Economic Sustainability Committee (ESC).

Related Topics:WhereaboutsYemi Osinbajo
Up Next

Bello vs NCDC officials: FG may declare state of emergency in Kogi