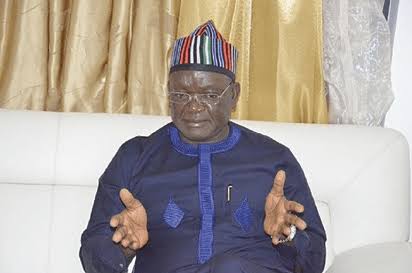 Benue State Governor, Samuel Ortom today flagged-off the distribution of 35,000 customized chairs and tables for primary schools in the state.

It was the first batch of 61,000 chairs and tables the Ortom administration in collaboration with Universal Basic Education, UBEC, plans to distribute to Benue primary schools this year. Over 30,000 of the customized desks and chairs were distributed to schools across the 23 local government areas last year.

Flagging off this year’s distribution, Governor Ortom expressed his commitment to uplifting the standard of education as seen in the ongoing upgrade of school facilities with more contracts for the school projects to be awarded when Government accesses the N2 billion bank facility it is processing.

“Investment in education is for the development of the society, and I am passionate about it. That is why I am repositioning SUBEB to make it strong so as to meet the aspirations of Benue people,” he stated.

The Governor gave assurance that the hiring of 5,000 teachers would be carried out as soon as the existing loopholes in the State Universal Basic Education Board, SUBEB are plugged and other forms of fraud are also curbed. He vowed never to shield anyone found to be involved in corrupt practices.

On securing the new chairs and tables, the Governor said he had directed the State Attorney General and Commissioner for Justice to design a legal instrument to enable the Government to search the homes of those in the habit of converting  the school furniture to personal use.

Speaking on the impending recession in Nigeria which is projected to contract the economy of the country in 2020 by 3.4%, sequel to which crude oil benchmark had now been pegged at $20 per barrel with adverse effects on the Federal and State Governments, Governor Ortom said the way forward is to return to agriculture.

He urged the people to prepare for the recession by cultivating every available arable land to produce food for sustenance and commercial purposes.

The Governor also reminded the people that COVID-19 is real and the best way to prevent the pandemic from spreading is adherence to measures such as social distancing, frequent hand washing with soap and avoiding public gatherings such as markets, burials, as well as religious and sporting events.

Earlier, Commissioner for Education, Professor Dennis Ityavyar and the Chairman of SUBEB, Comrade Joseph Utse, had commended the Governor’s giant strides in the development of basic education and the Education sector in general, even as they pledged their loyalty and support in that regard.