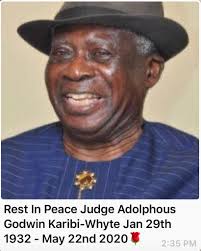 The transition of former Supreme Court judge, Justice Adolphus Godwin Karibi-Whyte to eternal life is a deep loss not only for Nigeria but the world in general, Deputy President of the Senate, Senator Ovie Omo-Agege has said.

According to Senator Omo-Agege, the loss is mitigated by warm memories of Karibi-Whyte’s profound and impactful contributions at state, national and international levels.

Reacting to the demise of the retired Justice of the Supreme Court, Omo-Agege urged his family members, people of Rivers State, members of the Nigerian Bar Association and Body of Benchers as well as friends and associates of the late judge at home and abroad, to take solace in his unforgettable imprints.

“He lived a long, highly productive life but even upon his exit at 88, the retired Justice of the Supreme Court and Professor of Law, Justice Adolphus Godwin Karibi-Whyte, CFR, profoundly impacted Rivers State, Nigeria and the global community with cerebral contributions in his chosen field. adsbygoogle || []).push({});

“It could be easier for many to remember his very significant contributions as a Justice of the Supreme Court and as Judge and Vice-President of the International Criminal Tribunal for the former Yugoslavia at The Hague but his noble impact pre-dated those assignments.

“The quality of his interpersonal relationships and intellectual achievements through Kalabari National College in Buguma, Rivers State which he left in 1950, the two United Kingdom universities where he studied before coming to the University of Lagos for his Ph.D eloquently attest to his towering capacity.

“His service records at the Rivers State Ministry of Justice, the Federal Revenue Court, Court of Appeal, the Supreme Court and on numerous national assignments that included chairmanship of both the Nigerian Constitutional Conference of 1994-1995 and the Nigerian Institute of Advanced Legal Studies (NIALS) speak of uncommon diligence and patriotic focus.

“I pray that God Almighty will grant the soul of our dear Justice Adolphus Karibi-Whyte, eternal rest and comfort the family left behind,” Senator Omo-Agege stated.