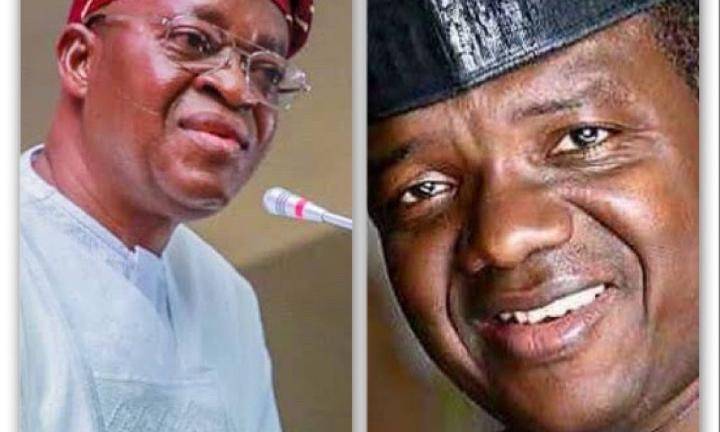 The governor of Osun Adegboyega Oyetola and his Zamfara State counterpart, Alhaji Bello Matawalle are engaged in verbal brawl over some youths from Zamfara that sneaked into the State of Osun.

CAPITAL POST earlier reports that Zamfara in a statement signed by the Special Adviser to the governor on Public Enlightenment, Media and  Communications, Zailani Bappa dares Osun to repatriate northerns youths who sneaked into Osun and other states in the South West.

Matawalle insisted that Zamfara indigenes are Nigerians who have rights of movement and can live anywhere in Nigeria.

He further said that, “the threat to use Amotekun to arrest northern youths who sneaked into Osun was against the Federal law that binds Nigerians together. ”

“Nigeria and the world at large is facing a serious and challenging pandemic. All civilised societies are joining hands together to fight the spread of this pandemic and even extending helping hands to others.

“It is therefore, disheartening that Osun State will take the path of isolating assumed outsiders and segregating what should be a common fight by all Nigerians”, Matawalle insisted.

Reacting, the State of Osun wondered how could its State policy be misinterpreted by Zamfara State.

Osun governor frowned at the manner of interpretation of its decision to arrest and send back some people of northern extraction who sneaked into the state during the lockdown period, saying its position on repatriation is irreversible.

Osun Government’s position which was made available to the Thursday evening said it’s action was in line with Presidential directives banning inter-state travels.

In a statement on Thursday, the State of Osun insisted:  “We have noticed a misinterpretation of the statement made by the State Government of Osun, in which it sounded an alarm about the activities of illegal miners in the State and those breaching its borders.

“We are awestruck by the fact that anyone could sieze such logical precautionary response in the midst of a global health emergency, to score cheap political points.

“The State of Osun has been on a total lockdown, and logically, its mines are closed.
“Unfortunately,  we have discovered that certain unscrupulous persons have been sneaking  into the State illegally, breaching the State’s borders in the process.

“The Government of the State of Osun will act only therefore within legal and moral boundaries by attempting to return these people  to their last known addresses before they  violated our lockdown.

“All we are doing is following Presidential directive that banned all interstate travels and movement.

“The State of Osun has shown highest regards to the respective State Governments of the concerned people by attempting to return them to their places rather than prosecuting them under the State’s Emergency Regulation.

“Every State in the country is upscaling its security measures in the fight against COVID-19 pandemic, and other vices.

“Zamfara State Government, a few days back, arrested some suspected illegal miners in the State, upon claims of being informed that they were providing arms for bandits.

If “alleged” illegal miners are abhorred in Zamfara, why then should the State of Osun be crucified for being safety conscious?

“The State Government of Osun recognises the right of every Nigerian to live anywhere within the country.

“We are a responsible and responsive government that places premium on the health and safety of its people, and we will continue to do everything within our power to protect our people.

“The State Government of Osun  believes in the unity of this nation but will not hesitate to take actions against those who breach its borders and try to jeopardize the health of its people.”