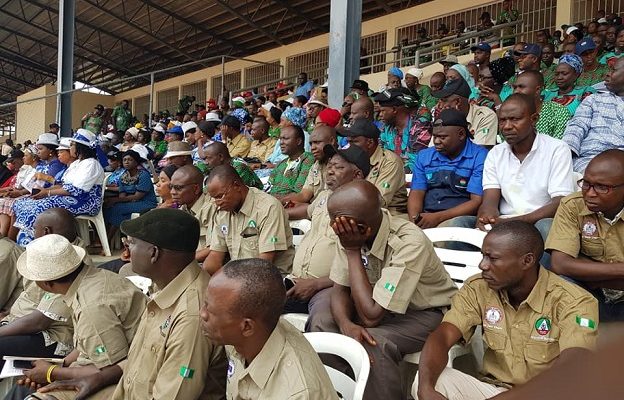 As Nigeria joins the rest of the world to observe the 2020 International Labour Day, Benue State Governor, Samuel Ortom felicitates with workers of the state for their commitment, understanding and cooperation particularly in the fight against COVID-19.

Governor Ortom says the workers have demonstrated uncommon determination and professionalism in all sectors to support the State Government in taking proactive measures to prevent the spread of the disease.

He specially commends workers who are on essential duties such as health and other services for putting in extra hours daily to ensure that Benue does not have additional COVID-19 cases, after the index case.

Governor Ortom says no amount of reward can adequately compensate the workers for their sacrifice to the state, and urges them to sustain that level of patriotism.

He restates the resolve of his administration to ensure that the welfare of workers especially salaries and pensions remains its priority.

The Governor however explains that Benue, like other states of the Federation, had no option than to revise the 2020 Budget from N189 billion to N119 billion, in response to the impending global economic crisis which is estimated to contract the economy of Nigeria by 3.4%, a situation that will have adverse impact on the states.

In a statement obtained by CAPITAL POST, Governor Ortom stresses that as a result, his administration has embarked on a number of measures to boost agriculture and increase food production. One of such steps, he says, is the recent sale of 50 tractors to Benue farmers at 60% subsidy.

The.statement said: “As part of measures to mitigate the negative effect of the looming recession, the present administration has resolved to take advantage of Benue’s rich agricultural potentials, by not only producing food for consumption but also for commercial purposes.”

Governor Ortom encourages workers of the state and other Benue people to take advantage of the COVID-19 period which has forced many of them to stay at home and engage in massive farming.

On the fight against Coronavirus, Governor Ortom commends the people for the level of compliance with the rules on COVID-19.
He expects greater cooperation as the partial lockdown continues, which he describes as painful but necessary in the interest of all.

The Governor states that though no new case of Coronavirus has been found in Benue, it is important that the people remain vigilant and adhere to preventive measures against the pandemic such as the use of face masks, hand sanitizers, frequent hand washing and social distancing