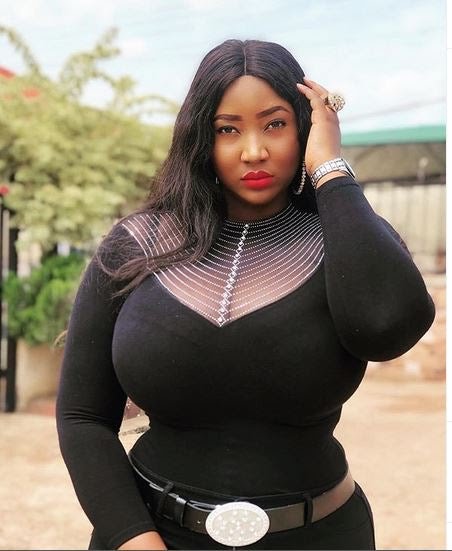 A Nollywood actress, Judy Austin has revealed that she hardly kiss in movies while acting because there are limits to everything in life.

She said intimate roles is off her limits as far as acting goes.

In an interview with Potpourri, the beautiful damsel explained that kissing deeply in movies or showing off her nudity is completely off-limits.

According to her, “I’m not going naked for any amount, and I hardly kiss in a movie. I will not do a kind of kissing where the guy would be fondling my breasts. I must not go nude to be a star. I shouldn’t do what my kids or family will see and be ashamed of. My limit is, I don’t do nude and I don’t do over romantic films.”

Speaking further, she also opened up on what turns her on and off the opposite sex.

“The only thing that turns me off is pride. I hate proud guys. Mr pride, bragging about what he has and what he can do, they turn me off. But I am easily turned on by kind and hard-working guys, funny and very neat. I love simple-minded guys, kind and stubborn guys, not stubborn in a stupid way. I love good-hearted guys who are dedicated to their work,” she said.

Read Also:  Why I'm yet to get married after acting for 23 years - Rita Dominic

Judy Austin was born Muoghalu Uchechukwu Judith. She’s also a movie producer and two films are currently to her credit in this regard; ‘Native Girl’ and ‘Fear.

She didn’t exactly start out as an actress, she was more into music and modelling. Acting came into her life when a friend, a certain Sylvester Madu urged her to give it a try on account of her good looks. She did and the rest, as they say, is history. She started acting in 2013 and by 2018 she has produced two film.

Am desperately looking for rich, handsome, dark person to marry me – Actress Christabel