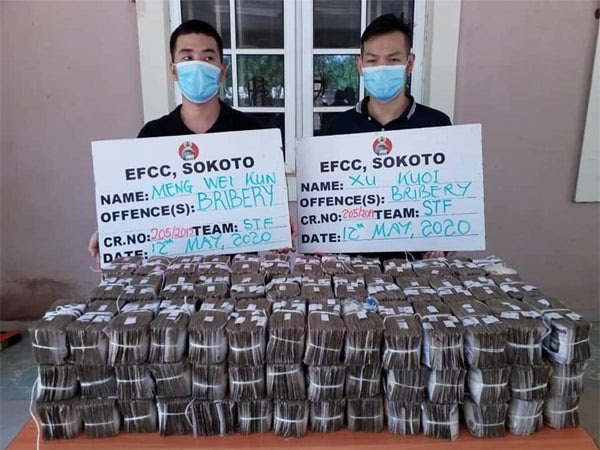 They were arrested in connection with a contract valued to the tune of N50 billion awarded to their Company by the Zamfara State government which the EFCC was investigating.

Those arrested are Mr. Meng Wei Kun and Mr. Xu Koi for offering a first tranche of N50, 000,000(Fifty Million Naira only) to the Zonal Head, Mr. Abdullahi Lawal.

The suspects who are the owners of the construction company, Zhonghao Nigeria Limited were arrested on Monday, May 11, 2020 in Sokoto as the EFCC official tried to play along.

The contract for the. construction of township roads in Gummi, Bukkuyun, Anka and Nasarawa towns of Zamfara State was expected to have been completed between 2012 – 2019, but the company failed.
The suspects were later paraded with the exhibits.

Police grills E-money for six hours over source of wealth