Connect with us
Spread the love 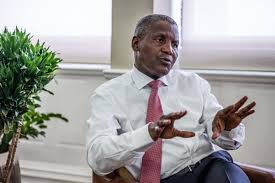 Africa’s billionaire industrialist, Aliko Dangote, on Wednesday disclaimed that his company’s trucks were transporting Almajiris to the Southeast and other parts of Nigeria.

In a letter addressed to the President General of Ohaneze Ndigbo, Chief John Nwodo, Dangote said there was nothing of sort, insisting that his company trucks were for goods and not for human passengers.

The letter which titled “Allegation of illegal haulage against Dangote Industries Limited’, was made available to journalists by Emeka Attama, Nwodo’s media assistant.

Nwodo and other Southern and Middle Belt leaders recently expressed concern about the influx of Almajiris to the Southern States.

Dangote Industries denied the “spurious and misleading allegations”, and appealed to the public to expose those carrying out illegal haulage activities.

The letter urged Ohanaeze and the general public to report any Dangote truck driver involved in such with evidence.

The company urged citizens to forward details such as truck type, content, colour, plate number, location and if possible, photographs.