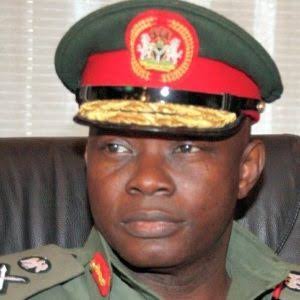 The Chief of Defence Staff, General Abayomi Gabriel Olonisakin has lauded the Nigerian Navy Hydrographic Office (NNHO) for the local production of maritime chart covering some parts of Nigerian waters, saying local resources was most needed at this time.

In a statement issued by Major General John Enenche, Coordinator,  Defence Media Operations of the Nigeria Defence Headquarters, on Thursday, Olonisakin explained that the charts have been certified and recognised by International Institutions.

The statement read: “The fact is that the recent products of the NNHO, harbour and operational charts, are certified and recognized by international institutions.
“This achievement is coming at a time when the need to utilize indigenous resources has been underscored by recent global events.
“It could be recalled that the NN recorded a significant operational milestone with the production of the second indigenous navigational chart of some parts of Nigerian waters by the Nigerian Navy Hydrographic Office (NNHO). ”

The statement noted that the new chart covers parts of Badagry Creek, from Ogunkobo, through Navy Town and Mile 2 to Tin-Can Island in Lagos waters.

“Work on the chart started in 2019.  With the completion of the chart, the NNHO has now commenced work on its electronic version which will be forwarded to the International Centre for Electronic Navigational Charts for validation and release.

“In the last one year, the NNHO has produced a number of nautical products which are currently used by Nigerian Navy ships and establishments. These include harbour chart of Nigerian Navy Ship BEECROFT and Nigerian Naval Dockyard Limited water fronts, port guide of Lagos harbour and operations charts of the entire Eastern Naval Command.  Others are maneuvering sheets for tactical navigation and a number of training charts among others.

“The International Hydrographic Community, particularly the United Kingdom Hydrographic Office (UKHO), has acknowledged the strides made by the NN in chart production.

“Consequently, the UKHO has accepted gradual hand over of the survey data covering Nigerian waters which are held in their archive and also to adopt NNHO’s charts rather than producing new ones. This is a confirmation that NNHO’s nautical products meet international (IHO) standards.

“The NNHO wishes to maintain this standard to facilitate safety of navigation within Nigerian waters and seamless takeover of the charting functions of Nigerian waters from UKHO.

“In line with the coordination role of the NN in Hydrography, the NNHO is also currently developing a harmonized Standard Operating Procedures to guide all hydrographic survey activities conducted in Nigerian waters by private survey companies and sister government agencies.

“This would ensure that data received from any of these survey companies/government agencies are accurate enough to be included in a chart”, the statement concluded.

Related Topics:CDSNigerian Navy
Up Next