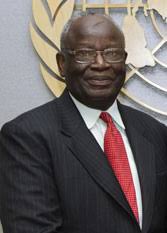 As reactions continue to trail the appointment Professor Ibrahim Gambari as the new Chief of Staff to the President, the Coalition of United Political Parties (CUPP) has recalled that the new CoS was an agent of Late Sani Abacha who defended dictatorship with reckless abandon.

In a statement on Wednesday, which was signed by the CUPP’s spokesman, Ikenga Imo Ugochinyere in Abuja, the body recalled how the CoS was allegedly involved in atrocities of government then.

The sstatement said: “Nigeria Opposition Coalition(CUPP) have received the official news of the appointment of a former Minister of Foreign Affairs, Prof. Ibrahim Gambari, as the new Chief of Staff to President Muhammadu Buhari to replace the late Abba Kyari who died recently as a result of complications from COVID-19.

“Opposition Coalition Parties are not unaware of the fact that Prof. Gambari is a die hard agent of the late military dictator, Sani Abacha and did everything on Human earth to defend the numerous atrocities of the Abacha regime while serving as Gen. Abacha’s UN representative including supporting the evil execution of late Ken Saro Wiwa and annulment of June 12 election.

“We are therefore welcoming his new appointment with caution. We shall watch him closely as he resumes duties at the Presidential Villa. We shall hold him responsible for all his new actions and judge him by them.

They called on the new Chief of Staff to use his experience to assist the government.

“In the meantime, the CUPP is calling on Prof Gambari to use the experience he has garnered on the global stage for years to assist the country to pull out his boss, the President, from the deep pit of incompetence where he has sunk into.

“We remind him that with his new appointment, he has been placed in a strategic position to help re-direct the nation from the path of destruction which his boss has been moving it to.

“He should therefore stand up and be counted among those interested in the repositioning of the country so that history can be fair to him at the end of his assignment.”

Related Topics:CUPPIbrahim Gambari
Up Next