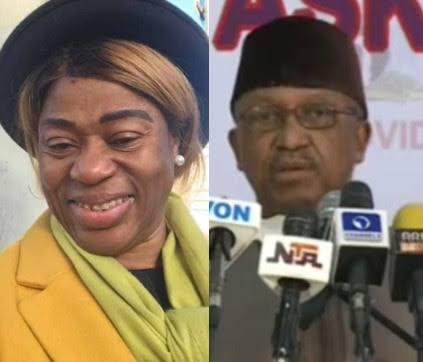 Mrs Susan Okpe, Benue State first COVID-19 index case has sued the Federal and State government for transferring her from Makurdi to Abuja where she tested positive for the coronavirus pandemic.

“The woman sued the state and the Federal governments when she was transferred to Abuja for treatment.”

Read Also:  At 60: Nigeria on march to greatness - Gbajabiamila

The deputy governor, who doubles as chairman of the Emergency Committee on COVID-19, explained that there was no other COVID-19 case besides that of Mrs. Okpe’s.

He said the state government had procured 100,000 face masks from Cross River State garment industry to be distributed free to the residents.

Speaking on palliatives, Abounu
said the committee received three trucks of rice from the Federal government and there have been shared across the State.
He said that the committee is working round the clock to stop the spread of the virus in communities.

Also, the state government is to establish a Centre for Emerging Infectious and Tropical Diseases Intelligence and Management in the state.

Governor Samuel Ortom announced this on Thursday in Makurdi while receiving a proposal from the Chief Medical Director (CMD) of Benue State University, Prof. Terlumun Swende, on the need to kick-start the project.

The centre is to be domiciled at the College of Health Sciences of the state university.

Ortom, who expressed happiness at the proposal, said the establishment of the centre would enable the state to tackle various diseases across the state.

“This will be a plus and a milestone for the health sub-sector, not just in Benue State but the entire country,” he said.

The governor set up a committee, headed by Health Commissioner Dr Sunday Ongbabo, to examine the proposal and fine-tune the key areas in a bid to fast-track the kick-off of the institution.”