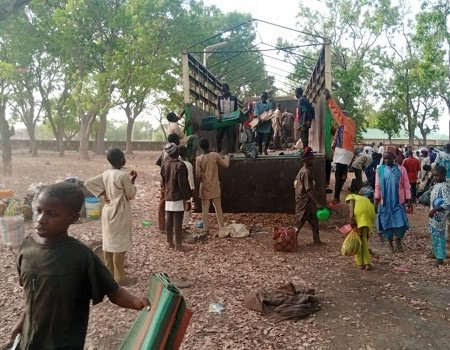 Kogi State in the North Central Nigeria might have been the next bus stop for the Almajiris who are migrating from the coronavirus ravaged  Kano, Kaduna and Sokoto and other parts of the core North.

The Almajiris who’s COVID-19 status are not known see Kogi State as not being strict following the governor’s lifting of lockdown and restoration of worship centres in the State.

The dreaded coronavirus otherwise known as Covid 19 may have been actively be spreading across  the 21 Local government areas in the state without people knowing.

The development of the Almajiris trooping into the State with unchecked influx of vehicles is an undisputable fact that would change the coronavirus status of the State any time soon.

This is not withstanding that some Almajiris who claimed they came from Kano were intercepted by the Special Assistant to Kogi State governor on Security Matters in Lokoja Local government and were immediately turned back last week.

More so, Kogi State government apart from bounded by nine other state, it is the gateway to North and South.

Particularly so, other State of the South west, South South and Southeasrt which have boundaries with Kogi State have been so vigilante in the look out for intruders. These States have been intercepting Almajiris and were turning them back to their States of origin.

Sources revealed that  between Thursday and early Monday morning, that no fewer than 16 trailers came into Lokoja the state capital with hundreds of commercial motorcycles operators  and their bikes from Kano, Sokoto, Kaduna, and other far northern states. Some of them were alledgedly turned back elsewhere, but headed to Kogi, according to reliable source.

It was also gathered  hundreds of other  people who entered into the state with ease from Niger, FCT, Benue, Enugu , among others including some Almajiris who were ferried into the state from Nasarawa state.

It will be recalled that about 10 of this almajiris taken to Kano State from Nasarawa tested positive but in the case of Kogi, it was learnt that there are no medical team on ground to test  any one neither is there any  security personnel to check the the traffic from the numerous borders of the state.

The lack of protective kits in Kogi various hospitals coupled with plans by the State government to shortchange State workers in payment of salaries has precipitated threat to down tools by Doctors.

Explaining how possible commuters were beating checkpoints on high ways to get to Lokoja, the source said, “motorists offers between ₦5,000 – ₦10,000 per vehicle depending on the numbers of passengers which the police and soldiers gleefully collected.

Read Also:  Dangote reacts to allegation of transporting Almajiris to Southeast in trucks

It was also learnt that most of the commercial operators later moved to some major towns in the state like,  Kabba, Okene, Ayingba, Idah while the almajiris are clustered around the paparanda junction with some in the market areas and bank locations in the state capital.

Meanwhile, residents of the State have expressed fear that with  the widespread of the deadly coronavirus all over the globe, their lives are at risk as the State government is not doing enough to protect them.

Those who spoke Capitalpost correspondent also expressed fear that the state is yet to have a functional isolation centres ,nor any palliative incentives meant for its citizens.

Those who spoke with our correspondent also lamented that while many states are currently carrying out  fumigation in strategic areas in their various states, Kogi State has not done so neither does it have intention of doing so.

One of the concerned citizens who spoke to our correspondent, Alh . Mohamed Jamiu said  that even the common  hand sanitizers and protective gloves expected to be distributed to members of the public are neither not a available or in the hands of few government functionaries and their family members alone.

He said a situation where the state governor and the commissioner of health are not forthcoming ,it has the tendency of creating rumours to thrive over the spread of disease in the state.

Also speaking with our correspondent over the weekend in Lokoja, one of the committee members set up by the state government to help  curb the spread of  the deadly disease expressed deep disappointment on how the governor and other necessary government functionaries have treated the issue with levity.

According to him since the committee code named Covid 19 Squadron team has been set up several weeks ago, no logistic has so far been released to it either through cash, drugs or equipment while the committee has no durable vehicles to work with.

The member who did not want his name in print said on more than three occasions that the committee met, not even needle was made available by government to work with as the members comprising of clergymen and other reputable citizens are already fed up of what

Related Topics:AlmajirisKogi Security
Up Next