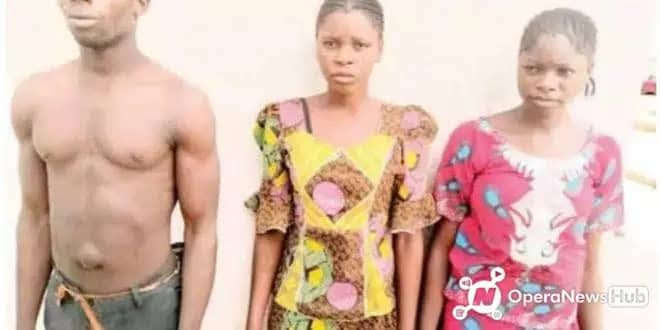 Two Nigerien sisters arrested with a motorcyclist suspected of supplying food items and women to bandits in Zamfara State, have confessed that they charge each member of the group N6,000 for intercouse per night.

According to the Nigeria Security and Civil Defence Corps (NSCDC), Zamfara State command, Shafi’u Abdullahi and the sisters; Binta Husaini and Balki, were arrested on their way to Anka Local Government Area, where Abdullahi was taking supplies to the bandits.

Aliyu Garban, the corps’ commandant, while briefing journalists, said luck ran out on the suspect, when he was intercepted by officers of the command after a tip-off.

The commandant stated that the motorcyclist was arrested along Bagega-Anka Road with the two sisters, who are from Niger.

“During our Investigations, the suspect, Shafi’u Abdullahi, was discovered to be assisting a suspected notorious leader of the bandits called ‘Shaho’ by supplying social services to his hideouts. Binta and Balki are sisters and Shasho’s girlfriends and his friend, Jijji,” he said.

“As soon as preliminary investigation activities against the suspects were completed, the command would transfer the case to other sister agency for further investigation and determination,” the commandant added.

They explained that Abdullahi normally conveyed them to the bandits on his motorcycle.

Read Also:  Bandits seizes man delegated to take N5 million ransom to them at their own instruction in Niger

However, Abdullahi admitted that he had a contract with the bandits, but said he has never been to their hideouts.

“The bandits used to come out of their hideout to collect the items from me. I have never visited their hideouts,” he stated.

Related Topics:BanditsNigerien sisters
Up Next

Israeli war planes carries out airstrikes against Hezbollah in Lebanon

COVID-19: El-Rufai demands 50% salaries of senior officials to feed the vulnerable in Kaduna