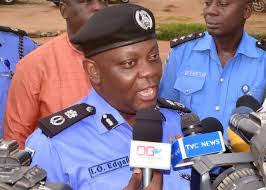 The Nigeria Police, Ogun State Command said, 15 of deadly cultists terrorising Ifo and its environs have been arrested.
The Police Public Relation Officer in the state, DSP Abimbola Oyeyemi, made this known in an interview with journalists in Ota, Ogun State on Sunday.

Oyeyemi further disclosed that 19 of cultist were earlier arrested totalling 34 so far.
He explained that the hoodlums have been hiding under the umbrella of cultism to steal and terrorise areas like Ifo, Ijako, Ijoko, Agbado and Joju among others.

“The Police are doing everything possible to check the activities of these cult boys in Ogun, “he said.

He revealed that two deputy Commissioners of Police were leading the operations in Ifo,Joju, Kajola, Agbado, Ijako and Ijoko among other areas.

The police spokesperson reiterated the command’s commitment to safety of lives and property in the state.

He expressed the readiness of Police to swing into action to apprehend criminals, while asking residents not to panic.

Related Topics:CultistsOgun Police
Up Next