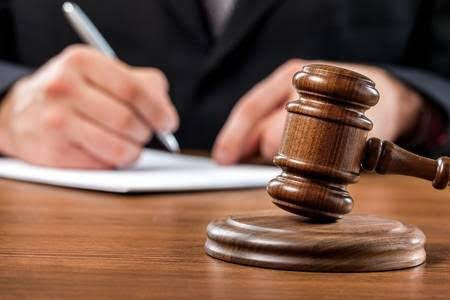 Osun State High Court sitting in Ikirun on Friday sentenced two persons, Elijah Oyebade, 25 and Jelili Raji, 35, to death by hanging for the murder of a 400-level student of Osun State University, Rofiat Adebisi.
Elijah a commercial driver, picked the deceased to Raji a herbalist, who was said to have commissioned Elijah to bring any lady to him for ritual.

The following day Rofiat Adebisi’s lifeless body was found by the roadside along Egbeda/Iragbiji road.

The presiding judge, Justice Oyejide Falola, found the accused persons guilty after over two years of the commencement of the criminal prosecution.

They were first arraigned alongside Yusuf Ajibade, 28, on November 14, 2017, on a three-count charge of conspiracy to commit murder, murder and stealing preferred against them.

In the course of the trial, prosecution counsel tendered exhibits before the Court, but convicts testified for themselves.
The prosecution counsel also called dove witnesses to support his claims.
The two Prosecution Counsels, Kareem Adekilekun and Kemi Oyolola who appeared before the Court earlier explained that the defendants murdered one Miss Rofiat Adebisi, a 400-level student of Osun University, Ipetu-Ijesha, on Dec. 22 2016.

But the following day, he added that Rofiat’s body was found by the roadside along Egbeda/Iragbiji road in Boripe Local Government Area of Osun state and upon investigation, her iPhone was tracked to one Qadri who claimed it was sold to him by one, Yusuf on directive of Elijah, the commercial driver that picked the deceased.

In Elijah’s statement, “Raji, who is also known as Ifa ask me to supply him a maid. He also gave me the charm to touch any lady I intended to bring for him and assured me that she will not argue with me.

“I delivered Rofiat Adebisi, a 400 level student of UNIOSUN, to him at his shrine and he paid me the sum of N10,000.
“I also used the charm on the deceased while she tried to put her luggage in the car trunk.

He also told the court that the confessional statements of the three convicted persons were corroborated by the police, whose report showed that Oyebode had sex with deceased before taking her to Raji’s shrine.

Counsel to convicts, Suleiman Bello, pleaded with Court to temper Justice with mercy.

But delivering his judgement, Justice Oyejide said, “the prosecution counsel proved his case against the convicts beyond reasonable doubt”, while acquitting  the second convict, Ajibade, of a two-count charge of murder and conspiracy but convicted him on the third count charge of receiving stolen property.

Justice Falola ordered that the shrine where the deceased was murdered be forfeited to Osun state government.

Related Topics:HangingOsun Court
Up Next