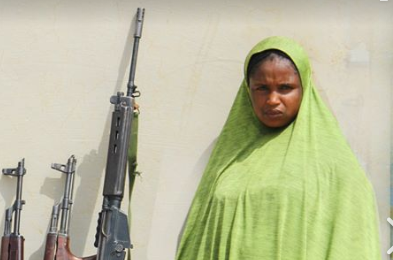 A female kidnappers’ armourer, who operates in four states of Northwest Nigeria, Fatima Garba has been arrested.

The Nigeria Police Force on Tuesday said it nabbed a 28-year-old female member of a kidnap gang infamous for perpetrating crimes in Sokoto, Kebbi, Kaduna and Niger States.

The armourer of the gang, was arrested alongside other members.

“Fatima, who confessed of being the gang’s armourer for over a year, claimed to receive a handsome reward each time the weapons were returned to her after each operation.

“She acknowledged knowing that the arms which she usually kept in a neatly dug hole in her compound were used for robberies, kidnapping and other criminal purposes,” the Police spokesperson, Frank Mba, said in a statement.

Fatima, a trader and single mother of two, was said to have been recruited by her boyfriend, Abubakar Usman.

 
Some of the recovered items
The Police said other members of the gang have been arrested.

It added that some items were also recovered from the gang including five AK47 rifles, one G3 rifle, one Berretta pistol, 1476 rounds of ammunition, 36 rounds of G3 ammunition,  six AK47 magazines, one operational vehicle, eight mobile phones and a box containing operational tools.

“All the suspects will be charged to court at the conclusion of investigations,” the Police stated, noting that it would continue to ensure the protection of lives and property especially during the lockdown period.

Related Topics:ArmourerFatima Garba
Up Next

‘Stand up to your responsibility’, Omala people tell Bello over frequent Fulani killings