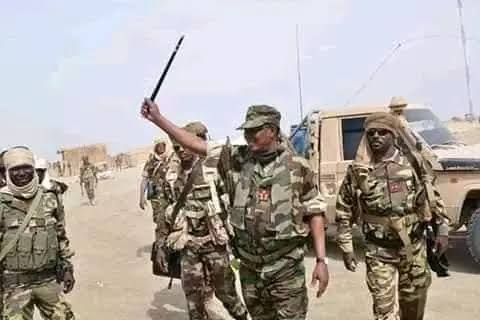 A few days ago, Boko Haram/ISWAP forces launched an ambush on Chad forces, which left about 100 dead, an attack that provoked President Idris Deby.

He moved from the State House and rallied his Army and took the war to the door steps of terrorists right at the far away Lake Chad where they have been holding sway.

Idris Derby and the State forces pushed hard on terrorists, chasing and over running all the camps and islands.
Read Also:  Bandits dethroned village heads, imposes new ones in Sokoto communities

The Boko Haram terrorists in their pursuit of war, deserted their armoury and large cache of arms abandoned.  They have become so much agitated that they have to escape Chadian onslaught with their wives and children.
The Terrorists have been on fire, some of them fleeing north of the Chad lake west of the Shekau dynasty, President Idris Deby has driven them out of his home country while our spies have confirmed this.
They are seen with their wives and children fleeing, some of them coming into the cities after shaving their hair to blend.

Boko Haram is fleeing from the area where President Idris Deby is currently chasing them, but they are plotting to get away with their wives and children, which is what has given them the Nigerian army that they cannot fight against because it violates United Nations war laws against women and children.

So far, President Idris Deby is on the verge of severing any Boko Haram insurgency from his homeland of Chad, and reclaiming a major armory of terrorists. A good history in the field of Boko Haram terrorism.